The unique character of Believers Eastern Church is expressed in the design of its emblem: a people deeply committed to the faith and practice as it is revealed in the Word.

The early Church fathers chose the symbol of the cross as a reminder of all that Christ had done for them. Its two bars were already a cosmic symbol from remote antiquity representing the axis between heaven and earth. Their choice had a specific explanation. They wished to commemorate as central to their understanding of Jesus, neither His birth nor His youth, neither His teaching nor His service, neither His resurrection nor His reign, nor the gift of the Spirit, but rather His crucifixion and His death.

Richard Hooker, a 16th-century theologian, applauded the fact that the early Church fathers, in spite of heathen scorn at the sufferings of Christ, “chose rather the sign of the cross than any other outward mark, whereby the world might most easily discern always what they were.”1

The Cross and the Circle

While the circle in the logo represents eternity, the cross is not enclosed or contained within the circle. It goes beyond the circle, implying that the cross is the centrality of our faith and that its significance transcends eternity. It represents the Lord Jesus Christ and His redemptive work on the cross.2

So it is the supreme priority of our church to enable God’s people to know Jesus more fully and intimately and hunger to become like Him. Thus they will manifest Christ’s life as they die to self through the cross and follow in His footsteps.3 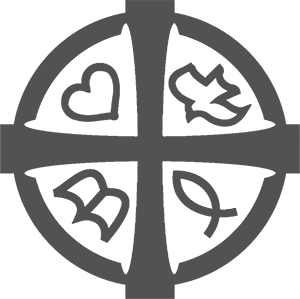 The four emblems, within the circle stand for the emphases we have in the Church.

The heart represents agape love. We believe that love is the most important trait of a follower of Christ, without which we have no right to call ourselves Christians. We give priority to teaching on the unity of the Body of Christ and in living out love in practical terms, thus expanding the kingdom of God.7

Teaching through the Word verse by verse to feed the sheep is emphasized in Believers Eastern Church. We give great emphasis and supreme priority on the teaching of God’s Word in our worship services and other Bible study gatherings for the believers to grow into Christ’s likeness.5

During the severe persecution of the early Church, Christians used the noncommittal painting of a fish to identify and greet one another, only known by the believers themselves. The ichthys (“fish”) was an acronym for Iesus Christos Theou Huios Soter (Jesus Christ, Son of God, Savior). But it did not remain the Christian sign because the association between Jesus and the fish was purely acronymic and has no visual significance.

The fish sign in the Believers Eastern Church logo is used with its direct connection and link with the mission of the Church as it was told by Christ Himself, “Follow Me and I will make you ‘fishers’ of men.” Therefore, we acknowledge our commitment and passion to fulfill the Great Commission—our call from Christ, who is the head of the Church.8