The Father and the Son

Furthermore, He was made a man in the incarnation and took the form of a servant.  In His humanity, He is under law, He is under God.  He is subject to the Father in the capacity of His humanity.  If the Father desires something, then the Son being subject to Him desires it as well.  They are one Godhead with one purpose.

The only begotten Son of God says, “I seek not my own will.”  Is this our attitude?  Speaking for myself, we often seek our own will.  We want our own way and will do everything we can do attain it.  However, the Son humbles himself and seeks the will of the Father.  Let us follow His example and do the will of the Father, the Son, and the Holy Spirit, for the Trinity has one will, power and majesty.

Jesus appeals to the witness of St. John the Forerunner and yet He says, “I do not receive testimony from man.”  Why does He appeal to a man then?

Second, it is because of the mercy of God.  The people respected John as a trustworthy source and as a prophet.  They believed the words that John spoke, so God bore witness through the instrument that they believed.

St. John the Forerunner was a burning lamp.  In fact, the Holy Apostles and indeed all people are lamps St. Augustin tells us.  We are lamps because we can both be lighted and extinguished.  If we trust and follow Christ we are lit, if we turn away, we can be extinguished.

In comparison, Christ is not a lamp but a light.  For He cannot be lit or extinguished like us.  He is always shining.  Just as the Father has life in Himself, He has given to the Son to have life in Himself.

The Works of Christ

In our passage today, there are four testimonies about Christ – God the Father, John the Baptist, His own works, and the 1st Testament Scriptures.  In verse 36, we are looking at the works.

St. Hilary asks the question which you may have asked yourself what do these works prove?  They prove that He was sent.  Notice that He isn’t doing His own works, but the works of His Father.

His being sent and doing the works proves a second point.  It proves His Son-like obedience to the Father and the authority of His Father.  These works can only be accomplished by One who is sent by the Father.

Jesus states that the Jews here had never heard the voice of God or seen His form.  However, we know from having read the 1st Testament that God has appeared to Abraham, Moses, Ezekiel, Isaiah and so on and so forth.  What does He mean here?

First, He is not speaking of seeing God in literal sense but more of a philosophical sense, but we’ll get to that shortly.  Second, In St. John 1:18 we have another statement, “No one has seen God at any time”.

No One Has Seen God

It is a valid point that no one has seen God, but it is not the point of our passage this morning. However, in the 1st Testament when God appears, it is God the Son and not God the Father who is appearing.

In the Theotokos and Pantocrator icons, we can see God the Son depicted not God the Father.  In my home, I have an icon of the Holy Trinity which has three figures.  I was curious and wondered who was who, and I found out that you don’t depict God the Father in icons.  Each figure represents a person of the Holy Trinity, but you don’t get any more specific than that. 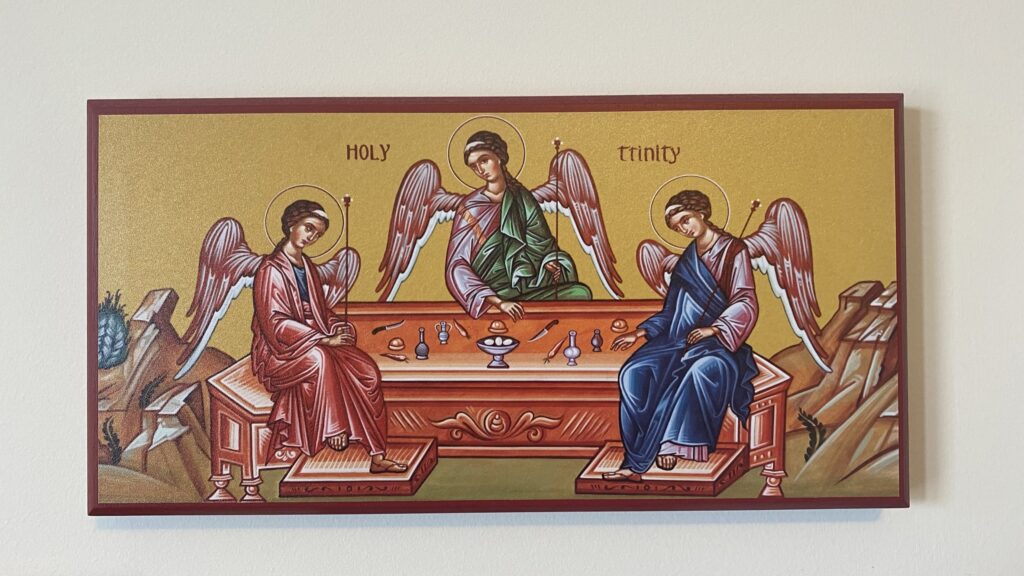 What Does it Mean to See God?

Back to the context of Jesus speaking to these particular Jews.  St. John Chrysostom explains,

He [Christ] means to impress upon them the philosophical understanding that God has neither voice nor shape but is superior to such modes of speaking about Him.  For as in saying, “You have never heard His voice,” He does not mean to say that He has a voice but that they cannot hear it.  And also when He says, “Nor have they seen His form, “ no tangible, sensible or visible shape is implied to belong to God….But why, He says, do I bring these things up?  I do so because not only have you never heard His voice or seen His shape, but it is not even in your power to assert what you are most proud and assured of: that you received and kept His commandments.1

Therefore, to hear and to see God is to receive the commandments and to live them.  It is to read the Scriptures and the Fathers and to follow the instruction that they have given.  It is not necessarily to physically see or hear God.  When our manner of life changes, then we know that we have seen and heard God.

The Witness of Scripture

Jesus then moves from speaking of the form of God to speaking of His Word.  The Word of God who is Christ incarnate is the image, expression, and form of His Father.  The Jews did not receive Jesus who spoke to them and thus they also did not receive the written word – the Holy Scriptures.

The Fathers tell us that the Pharisees liked to think that the Divine Word was with them and that they had come to a greater level of knowledge.  However, their rejection of Jesus as Christ was proof that they had not truly received the Divine Word of God.  Let us take this as a warning, lest we also fall into this trap and think that just because we know the Holy Scripture, we know God.

St. John Chrysostom sums up the problem and failure that the Pharisees had,

It was not even in their power to assert what they boasted the most about, that is, that they had received and obeyed God’s command….Although God instituted them, you do not have them.  For if the Scriptures everywhere tell you to believe in me and you still do not believe, it is clear that His Word has departed from you.2

The Necessity of Finding Christ in the Scriptures

They search the Scriptures, Jesus says.  This is the very thing that they should be doing.  We are not to just have a cursory knowledge of the Holy Scriptures, but we are to search them.  However, in their searching they had missed Christ.

The Holy Scriptures were given to them and to us because we were not present when God spoke to Moses or any of the prophets.  They were given so that we could read the testimony of the Father and the Prophets of Christ.

Furthermore, the effort that it takes for us to read and search the Holy Scriptures benefits our prayer life.  We have a more fervent love for God after we have spent time reading and been purified through meditation.  God fills us with joy as we spend more time with Him, and this is revealed as we pray afterwards.

The Jews and the Pharisees did not receive Him, and He states that He does not receive honour from men.  St. John the forerunner commended and testified of Him which He did receive.  The difference is stated in verse forty-two – they did not have the love of God in them.

The love of God changes the honour that we give from the honour of men to the testimony of God.  In these verses, Jesus is not reproving them for not giving Him honour but rather for not having the love of God in them.

Oneness of the Godhead

Here in the last few verses of the passage, we circle back to the oneness of the Godhead.  Christ comes in the name of the Father.  This means that He is not the same person as the Father and yet He has the same essence of the Father.

I would encourage you to recite the Nicene creed on a daily basis which affirms that the Father and the Son are the same essence.  From my understanding, our Eastern Orthodox brothers and sisters declare it at least twice daily.

We must also imitate the humility of Christ.  He always sought to do the will of His Father.  We must also follow suit and do the will of God.  If you are unsure of what the will of God is, read through the Gospels and the book of Acts as a starting point and follow the commands and examples that are there.  I remember an older believer repeatedly telling a group of young people that I was a part of that God will not tell you anything new to do before you are faithful in what He has already given you.

We are lamps.  Let us seek to do the will of God that we might be lit and never extinguished.

Jesus tells us in Matthew five that the pure in heart see God.  Are we seeing and hearing God?  That is, are we following  what we have read and heard in Christian instruction?  If there is something that you are having difficulty following, please speak with your priest or a spiritual mentor.

Let us seek to know God through the Holy Scriptures.  We must not be satisfied with a knowledge of know the truth, but me must press on to know God fully and intimately.

Finally, we ought to seek to maintain the love of God in us.  If we find we have lost that love, we must do everything in our power to reclaim it.  There may be times when we may not have desire to read and search the Holy Scriptures, but we must keep on because love is not an emotion but a way of life.