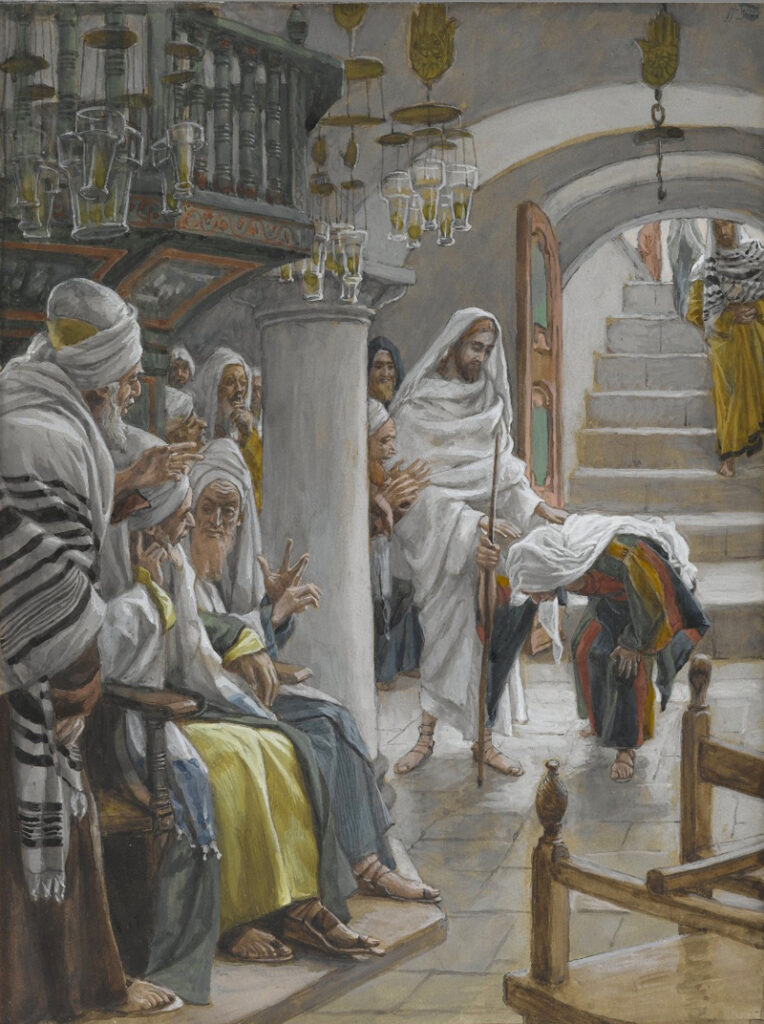 Our theme this week is to forsake pride and pursue humility.  In our Gospel reading we are looking at how pride blinds us.  As I was reading through the fathers on this passage, I learned that this story is a life example of what Jesus had been teaching in the previous four verses – St. Luke 13:6-9

Human nature rushes into sin and since we won’t produce the fruit of obedience, we lose our state of uprightness.  However, when the tree becomes fruitful, and the woman stands upright we see a picture of our salvation.  The woman was bowed over for eighteen years and the fig tree had been tended for three years.

The fathers understand the numbers a little differently than I am used to, but they see three sets of sixes signified in these eighteen years, so that the time period for both are symbolically the same.  The first two sixes are the sixth day of creation.  First, man was created on this day and second the Lord completed all His work.  The third six is this day plus all the time until grace came.  During this time man refused to do perfect works.   As a result, mankind like this woman was bowed down.  St. Gregory explains the state of mankind,

For every sinner who thinks earthly things, not seeking those that are in heaven, is unable to look up. For while pursuing his baser desires, he declines from the uprightness of his state; or his heart is bent crooked, and he ever looks upon that which he unceasingly thinks about. The Lord called her and made her upright, for He enlightened her and succored her. He sometimes calls but does not make upright, for when we are enlightened by grace, we oft-times see what should be done, but because of sin do not practice it. For habitual sin binds down the mind, so that it cannot rise to uprightness. It makes attempts and fails, because when it has long stood by its own will, when the will is lacking, it falls.1

This is our state until Christ empowers us to overcome.  However, even though habitual sin causes our mind to fall again and again, there is hope.  Putting the fig tree aside, the fathers see another picture in the number eighteen.  This woman now representing the Church could not expect to be healed unless she had fulfilled both law and grace.

In eighteen we see ten reminding us of the summation or the perfection of the law and in the number eight the fullness of the resurrection.  A little background on eight or the eighth day, in the ancient Church the resurrection was considered to have occurred on the eighth day rather than on the first day as we typically say today.

The fullness of the resurrection of course is the coming resurrection when by the mercy of God, we end our labours of this body and are united with God.  However, there is also some grace given for today.  In this woman coming on the Sabbath to be healed we see a symbol of confession.  She could have remained apart bowed down in her sins but she came to God in the synagogue.  We also must come despite our transgressions with confession, when we ask God for healing either physical or spiritual healing.

We also see that she was not loosed or healed when Jesus spoke to her but when he laid his hands on her.  In the quote from St. Gregory and other fathers talk about this, we are not only healed, as the woman was not healed, when Christ speaks.  Our mind may still be bowed down by sin.  We need to receive the energy from His divine hands so that we can in collaboration with Him do the works of virtue.  He is working in us so that it is not just Him or not just us but both of us together.

Further, we must not be just satisfied with the healing that comes through instruction and word.  It may be only when we receive the physical sacraments or mysteries that we receive the energies of God.  This is one of the reasons that we place such an emphasis on the Eucharist, Baptism, anointing for healing, and other mysteries.  In the mystery of God, He has caused it that we receive grace through physical things.

Having looked at what this story is a picture of, let us also see what happened as well.  This woman has an infirmity for eighteen years.  Why is there sickness in the first place and over this woman in particular?

We understand that sickness came through the fall of Adam and that Satan has been given the power to inflict it.  Through Adam’s transgression our bodies have both been opened to the possibility of infirmity and decay and Satan has been allowed to be the cause of disease in our bodies.

This is especially highlighted in the case of this woman since it states that a spirit had crippled her. Whether it was for her own sins or for the result of the transgression of Adam, she suffered from the cruelty of the Devil. God grants this power to the Devil so that those afflicted might use it to spur them on to better things.

One of the purposes of the incarnation was to defeat sickness. As St. Cyril of Alexandria puts it,

The incarnation of the Word and his assumption of human nature took place for the overthrow of death, destruction and the envy harbored against us by the wicked Serpent, who was the first cause of evil.2

This woman was bound by Satan, but the ruler of the synagogue took issue with this.  He is called a hypocrite because while appearing to be zealous for the Sabbath, He was really not upset that it had been broken but rather only that Christ had been glorified.

If we look at our own lives, do we look for a pretext to condemn others when attention has been directed away from us?  He was the ruler of the synagogue and was probably used to being in control of how things would go.  Does our pride keep us from praising God? If so, let us take some time today to repent and ask for the forgiveness of God.

Christ’s response to the ruler of the synagogue is both a rebuke and a prophecy.  It was the duty of the ruler to care for those under his care.  He should have been rejoicing that the healing that his compassion desired had been accomplished.  However, he was more concerned with maintaining his doctrinal position even though it wasn’t consistent with his own life.  We must beware lest this is true of us as well.

Second it is a prophecy of the Church.  Two animals are mentioned an ox which is clean speaking of the Jewish people and a donkey which is unclean speaking of the Gentile peoples.  Both of these peoples would quench their thirst in Christ and thus through the calling of two nations, the Church would be saved.  Those who had been bound in sin would be loosed in Christ.

Through this Lenten time, let us spend time in repentance and come to Jesus. Let us receive His grace through the Eucharist that we might overcome the habitual sins that are afflicting us.  When we are praying for one another, let us also lay our hands on them as well, since God somehow works through physical touch.

If someone in our care, receives healing from infirmity or sin let us rejoice with them. No matter whether we are the instrument for healing or if God uses someone else.

As we are working on putting aside vices through this Lenten season, let us focus on removing pride from our lives this week.  If we need others to pray for us, please ask someone that you can confide in to pray for you.

Finally, let us rejoice that God has loosed all peoples and brought them to refreshment in Christ.  Let us partake of that refreshment in the Eucharist in just a few moments.

Tissot, James, 1836-1902. Woman with an Infirmity of Eighteen Years, from Art in the Christian Tradition, a project of the Vanderbilt Divinity Library, Nashville, TN. http://diglib.library.vanderbilt.edu/act-imagelink.pl?RC=57031 [retrieved August 26, 2019]. Original source: https://commons.wikimedia.org/wiki/File:HealWomanSabbath.jpg.