Glory be to the Father, to the Son, and to the Holy Spirit,

Today we celebrate the birth of our Lord and Saviour Jesus Christ.  Our theme in the lectionary is The Greatest Gift of God.  In our Gospel portion we will focusing on the fact that the Son of God came to make us the sons and daughters of God.

The Person of God the Son 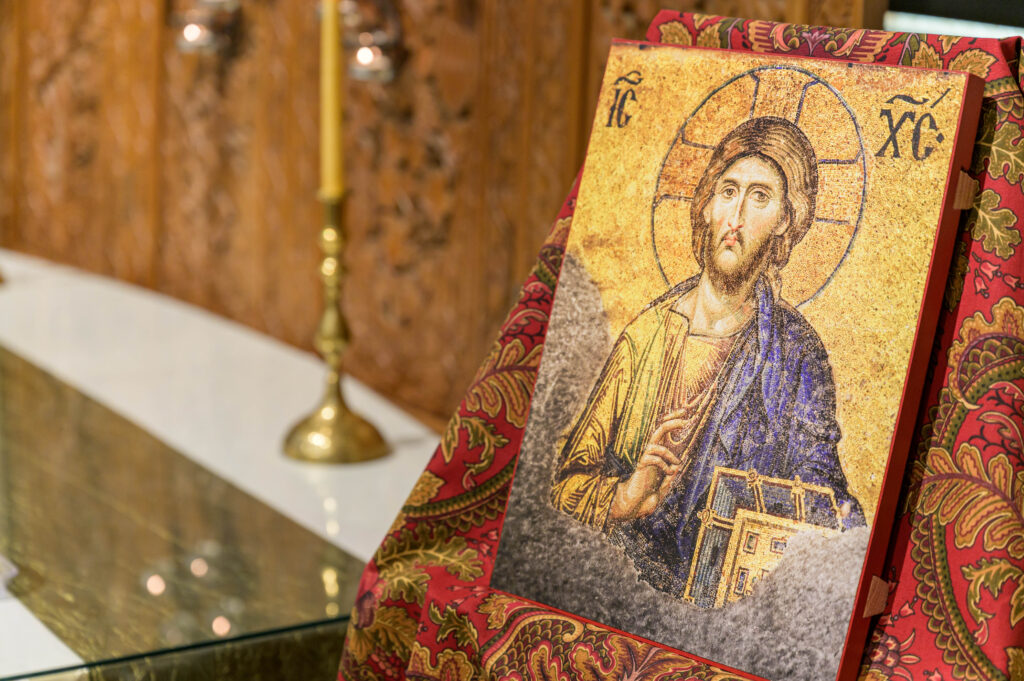 One of the main themes of Christmas is that God was born of humanity, of the Blessed Virgin Mary.  However, in this passage, we see another truth being emphasised as well.  God the Son was God from before the beginning, from before time began.  He is eternal, just as His Father is.

He is Equal with the Father

Everything that the Father of the Son, the Word, the Logos (the Fathers use many terms to refer to Him) is, the Son must also be.  He is the begotten Son of the Father and is in all things equal to Him.  He is, as we have declared in the Creed, in our services God of God, light of light, wisdom of wisdom, essence of essence.

The Father begat the Word equal to himself in all things as though uttering forth himself.

He is Eternally God the Son

We see in this opening verse that not only was the Word from the beginning but that He was person in relationship with the Father from the beginning.  “The Word was with God.”  He was eternally the second person of the Godhead.  This further tells us that their indivisible unity of the Godhead has existed from eternal past.  There has always been a unity of the Father and of the Son.

He is the Creator

All things created came into being through him, therefore, we know that He wasn’t created but is the creator and has always existed.  He is the source and creator of life.  This statement about the life that he creates is not merely saying that He has created, but He is the one who sustains that created things might continue to live.

The Mission of God the Son

Christ brings life and light to our world, to our darkness and the darkness does not overcome it.  This means that the powers of evil, although they tried their best to overcome him failed miserably.  As a result, now as we put away the unfruitful deeds of darkness, we are permitted to draw near to the Light.  As we draw near, we are able to become that perfect light as well – the children of light.

We are not forced to receive this light.  Look at the end of the passage, he gives us the power to become the children of God.  He doesn’t just magically whether we are willing or not make us his children.  He leaves the choice with us.

How do we make this choice to become his children?  We choose to leave evil.  God’s part is to give us grace to turn from wickedness to the righteous and holy way of life.  We must supply the faith.  It is our choice whether we exercise it.  God has given us the ability, but we must not frustrate his gifts.

This is not a one-time act but a continual lifelong practise of choosing the good and leaving the evil.  It is a lifelong practise of repentance and prayer.  It is saying, yes, I will pursue the characteristics of God otherwise known as the virtues.  I will endeavour to add to my life, humility, love, joy, patience and so on and so forth and I will remove from my life anger, bitterness, lust, envy etc.  We add and remove both by the grace that God has given us.  He has given us the power and we must act upon that power.

The World Rejected Him

Christ came into our world for no other reason than our salvation.  He was, as the Fathers phrase it, recapitulating the creation back to Himself.  He had created the world for His pleasure, and we had rejected Him.  The world did not know Him.

Who is the world that he is speaking of?  These are those whose only concern is the world and the things that are in it.  Whose whole focus and worry are for this present world.  We get our name from the things that we love.  We are children of God, because we love God, so also those who love the world are called world because they have taken on its nature and characteristics.

His Own Rejected Him

It is not only the world, but also His own who did not know Him.  Who are His own?  This is His people the ancient nation of Israel.  He has stated somewhere that Israel is His firstborn, but when Christ was not received, he transfers His grace to us the Gentiles.  We see this in the ministry of Saint Paul.  He went first to the synagogue, but when they refused the message, he then brought it to the Gentiles.

Having received this grace, we are lifted up through Him to share in His immortality since he partook of our mortality for this purpose.  He clothes our soul with Himself so that we might be worthy and perfect and through baptism be made into His sons and daughters.

As we have just mentioned, the Gentiles are included in this salvation which brings us to the theme of our 1st Testament reading – The Good News of Salvation is for the Whole World.

Salvation is brought to Zion.  Zion can be representative of three things the Fathers tell us.  First it speaks of the heavenly Jerusalem, our future home.  It is announcing Salvation to all those who will be there, past and present.  The good news was preached to those who had died in hope and also to the living.  The Fathers point out that John the Baptist was even the forerunner of Christ in this, for he died shortly before Christ and announced his imminent coming.

Salvation Spreads to the Whole World

This good news was preached in all the known ancient world very rapidly and one of the Fathers declares of this rapid spread of the gospel how could it not be called anything but beautiful that its salvation is known throughout the whole world.

The God of the universe bares his arm that is he has shown his power and he will show his power to all nations by bringing them into this common salvation.

As we look at our Psalm reading, we can praise the Lord with the writer for the Lord’s faithfulness.  He has won the victory and now he remembers his mercy and faithfulness.  Our God not only destroys our enemies, but He also brings salvation to us.  This is a benefit for both Israel and the nations.  Salvation has come to all.

The Son the Revelation of the Father

In our Epistle reading we learn that the Son is the complete revelation of God.  Christ is called Wisdom by all the prophets.  We read in Proverbs that Wisdom was there at the beginning of the creation. He has many and various ways instructed the prophets all throughout the 1st Testament.  Since He is the one true teacher, we are instructed to call no man teacher, because all teach through Him.

He Speaks Through Himself

This is very important.  This attack upon the unity of the God of the Old Testament with the God of the New Testament has been around since the 2nd century when Marcion brought it forward and was refuted by Tertullian, to our present day.

St. Anthony said we shouldn’t be surprised or astonished if someone famous writes to us because after all they are just men.  However, let us wonder and be filled with amazement because God has both written the law for us to read and has spoken to us through His Son.  God, the creator of the universe, speaks to us.  What a wonder this is!

We See the Father Through the Son

We know the greatness and the majesty of the Father which is invisible through the power of the Son.  It is through seeing the Son that we can believe that the Father is just as great.  God has stooped to our weakness so that a spiritual reality can be seen in the wonder and mystery of the Incarnation.  We know God the Father because God the son dwelt among us.

The Same Essence and Nature

There are two phrases that St. Paul uses to capture who Christ is.  First, he is the radiance of his glory and second he is the exact image of his nature.  These two phrases coupled together tell us amazing Truth.

The first phrase tells us that Christ is of the same essence as the Father.  Glory is often used as shorthand for the divine nature.  Radiance implies a lesser nature than the source of its radiance.  For e.g. the Sun is greater than the radiance of sunlight.  They are however the same essence.  Therefore, we have the second phrase.  He is the exact image of His nature.  Having both the radiance i.e. the essence of God and the nature of God, He is God of God, Light of Light.  They are unity in Trinity.

The Son is the same essence and nature of God, so why the incarnation?  He took on our flesh because it was necessary to purify our sins.  Our Saviour who was God and was of God needed to become of us to bring us into union with Him.  The whole reason why we celebrate Christmas morning and every year in this season is because God took on our nature to bring us into reconciliation with Him.

Today, as you read this, praise the Lord that he took on our nature to reconcile ourselves to Him.  As He has given us the power to become his children, let us receive that grace and work on overcoming the passions of pride, anger, envy etc. and equip ourselves with the virtues of humility, love, gentleness etc.  Let us praise God for His wonderful plan and rejoice that our Saviour has indeed come.