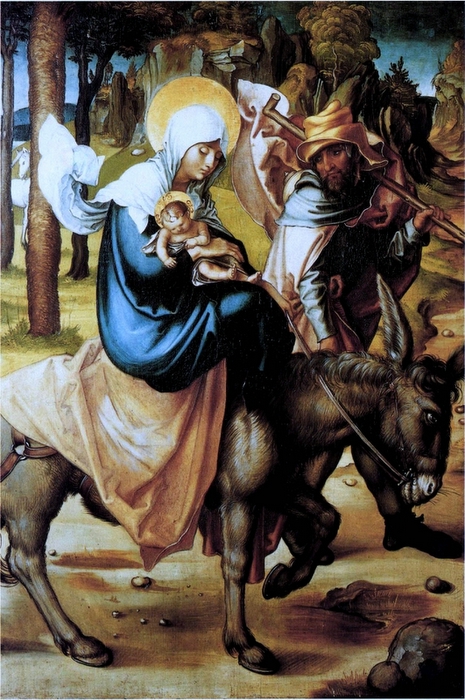 St. John Chrysostom asks the question, “[W]hy was the Christ Child sent into Egypt?”1  If we were to do some Bible survey, one of things that we would discover is that Egypt where Christ went and Babylon from where the Magi came from and returned are often symbolic of the world.  Christ, the hope of salvation, was born in Israel proclaiming salvation to that land.  His flight into Egypt and the Magi’s return to Babylon was the proclamation of salvation to the world.

God wanted humanity to expect his bounteous gifts the world over.  So he called from Babylon the wise men and sent to Egypt the holy family.

Second, he fled to Egypt to fulfill God’s promise to Egypt.

Behold, the Lord rideth upon a swift cloud, and shall come into Egypt: and the idols of Egypt shall be moved at his presence,

Our Lord went down into Egypt to put to flight the demons and idols that had held that nation in captivity for generations.  The primary reason for fleeing Bethlehem was not to escape the death being inflicted by King Herod, it was that too, but in his kindness to bring salvation to the nation of Egypt.

God’s kindness to Egypt in this was amazing.  Egypt had the stain of being the one who had abused and mistreated Israel in the time of Moses.  They now became the refuge of the Christ child the hope of our salvation and his family.

To be our High Priest and Sacrifice

Third, he fled for us, not for himself.  It was necessary that Jesus escape death as a child, so that he could serve as a steward of the sacraments at the proper time.  He had to grow up, so that he could as our high priest present himself as our sacrifice.  So that he could demonstrate to us and the world what a life of faith looks like, He needed to grow up.  He fled so that he could identify with our weakness of fleeing under persecution and give us the faith to endure such circumstances.  It is better to flee at sometimes than to deny the faith.  We remember that St. Peter refused to flee and ended up denying our Lord.

To be an Example for us

Fourth, the flight into Egypt tells us that if we are suffering persecutions and tribulations we shouldn’t expect to be crowned promptly for our troubles.  By our Lord’s example, we learn that a life of a fugitive is consistent with the ordering of spiritual things.  Following Christ is not a glamorous occupation in this life.

However, we get to share in the same kind of labour as the Blessed Virgin Mary did as well as the Magi.  They were both willing to retire in the humiliating role of fugitives.  The last few years have really highlighted awfulness of being a fugitive, whether it is the Rohingya people in Asia, or the Syrians and Africans fleeing to Europe.  A fugitive is someone without a country who no nation seems to want.  If we follow Christ faithfully this could be our lot as well, but we know our Saviour and many saints have walked this path before us and will strengthen us in the day of trial.

In this flight, Christ brought and announced salvation to Egypt and Babylon, but what of those who were left behind in Bethlehem?  Church tradition tells us that both Zechariah and Elizabeth both died protecting his cousin John as well as the numerous infants who were killed by the orders of King Herod.  Did Christ just abandon them to their fate?  St. Peter Chrysologus explains (he refers to the infants as soldiers),

Brothers, Christ did not despise his own soldiers but promoted them and granted that they might walk in victory before they lived.  He enabled them to participate in a victory without a struggle.  He gave to them the gift of the crown even before there bodies had grown.  It was Christ’s will that they pass over vice for virtue, attain heaven before earth and share in the divine life immediately.  Thus it was that Christ sent his soldiers ahead.  He did not abandon them.  He gathered up his ranks.  He did not leave them behind.2

He brought these infants home and preserved the life of John the Baptist his forerunner.  Today, we have an equally horrific slaughter of innocents.  There have been countless babies slain through abortion.  Yet, in the midst of the tragedy, we can rejoice that Christ has gathered each one of them to himself and given them a victory without struggle.  He will not leave them behind. 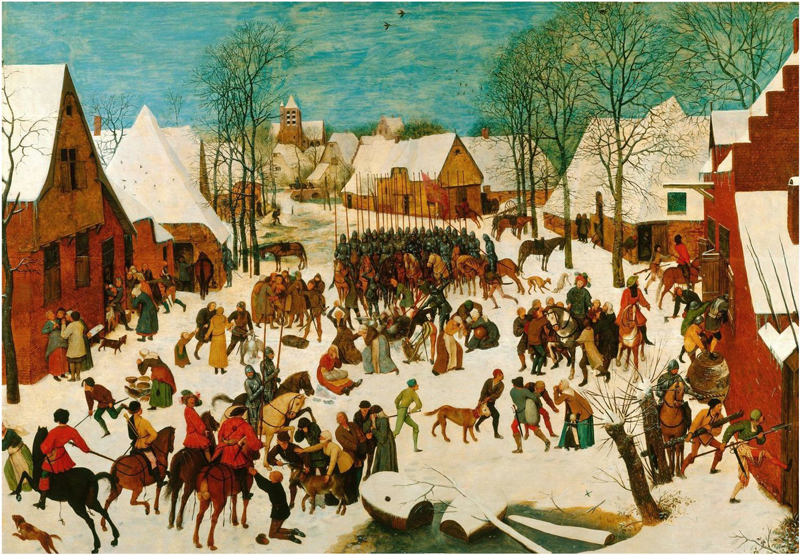 The infants slain in Bethlehem and the surrounding area also have the honour of being the first martyrs for Christ for they died on his behalf and have received the praise of martyrs.  They are remembered every year in the church on December 28th.  They were the first to be found worthy to die on Christ’s behalf, but they are not the last.  Their witness is sealed in their blood as countless other martyrs of the Church have been.

Praise God for the Good Things that He has done

As we look at the 1st testament reading our theme is to praise him for the good things that He has done.  He carries us from the house of slavery and makes us his children.  Let us praise His name.

In our psalm reading our theme is to thank God for his kindness.  We see that we, angels, all creation and everything are to praise the Lord.  We are to praise him for his deeds.  The fathers tell us that what God actually is, not even the angels have declared.  If we ask them, we will not receive any response except to glorify God.  God has done great things and we and all creation must praise him for His mighty acts.

Because of His Kindness

Finally, in our epistle, we learn that Jesus shared our humanity in kindness.  We know of course that in the beginning, He created the world in kindness.  Now, however, in our salvation, He shows an even greater loving-kindness in taking our flesh and suffering for us.

St. Paul shows both our similarity with Christ, by saying that He is bringing many children to glory.  Christ has identified and has become one with us and our disparity with Christ.  He is the pioneer, the author of our salvation.  He can do what we could not.  In His great kindness, He can and has brought salvation to the world.  He is greater than us because He is the one who consecrates as God and yet in His humanity, He has the same origin as us.  He shares in our flesh.  One of the fathers tells us that if He did not share in our flesh then He wouldn’t have needed to flee into Egypt.  It would have been impossible for Him to be crucified without flesh.

Christ took on our flesh and used it as a weapon against the evil one.  The flesh that was defeated by Satan in Adam now conquers and destroys his power over death.  The evil one is forced to relinquish his hold upon all those who he formerly held power over.  Through the death of Christ destroying death all flesh now has the opportunity to rise from the dead.  Death no longer has power over us.

In taking on our flesh, he did not cease from his divine status.  He continued to be what He was, even though he now had flesh.  This has been the orthodox teaching of the church from the beginning.  He is fully God and He is fully man.  Therefore, we call his mother the Blessed Virgin Mary the Theotokos (the God bearer) and the Mother of God not because his deity began in her womb, but because his humanity did.  He has always been God, but he joined His divinity to humanity at a specific point in history.  The virgin Mary became His mother and we call her blessed because she was chosen for such an honour.

To be Both Priest and Sacrifice

In order to be both our Priest and also the victim the sacrifice, He had to have our flesh.  He was led as a lamb to the slaughter and as a priest according to the order of Melchizedek he offered up himself.  He took away our fear of death and now we view it merely as a transition to the superior life and accept it joyously from those who persecute us for the sake of Christ.

To Identify With us

From the beginning of Creation when Adam fled from him in the garden to our present day, when we fall from temptation and flee from Him, He is there in kindness and love pursuing us.  In His great love He rescues us and undoes the sin in our lives and makes us holy as he is holy.  Let us praise His name forever.

We must find hope in our persecutions that others have walked in the way of loneliness and humiliation of being a fugitive for the sake of Christ before us.  We must ask for discernment to know whether we should flee persecution that we deny not the Lord or if we should remain and become a martyr for His sake.

Let us also pray that the horror of abortion be removed from our nation and the world, and yet at the same time rejoice that God has brought these little ones to His side.  Finally, we must praise the Lord for the salvation that He has given to us.

Giorgione, 1477-1511. Adoration of the Magi, from Art in the Christian Tradition, a project of the Vanderbilt Divinity Library, Nashville, TN. http://diglib.library.vanderbilt.edu/act-imagelink.pl?RC=47443 [retrieved April 14, 2020]. Original source: www.yorckproject.de.