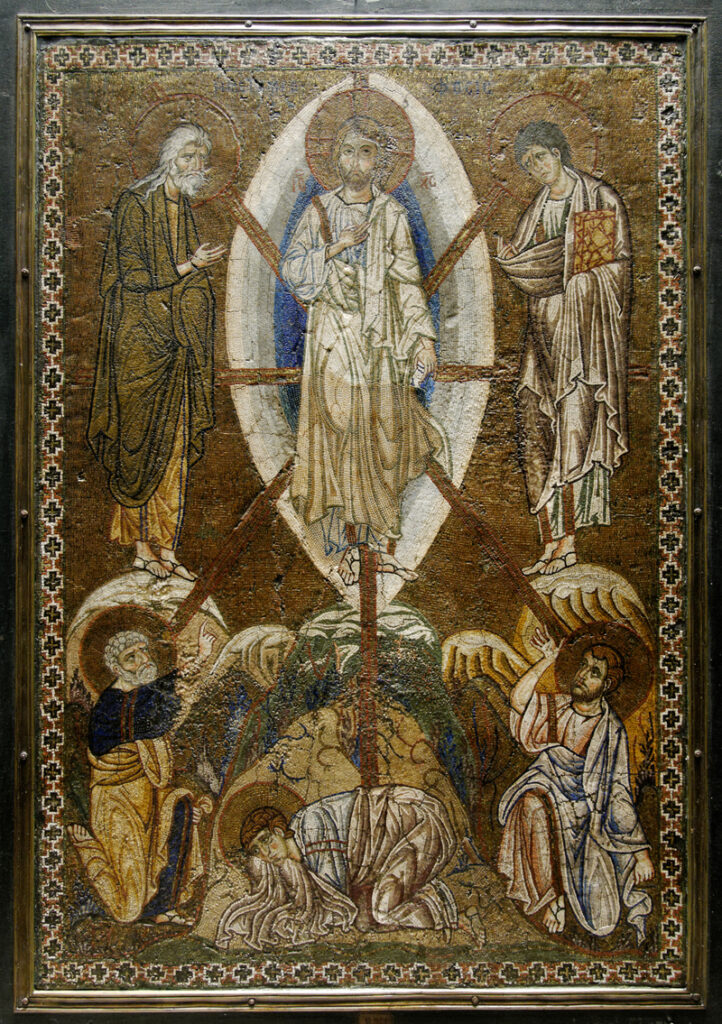 Today, the last Sunday of Epiphany, in the protestant liturgical world is the Sunday of the Transfiguration.  The Roman Catholics celebrate it in two weeks.  The Orthodox formerly celebrated it during Lent as well but it was moved to August as it was probably considered to joyous of a feast for Lent.  The protestants and Catholics seem to celebrate it a second time in August as well.

With Transfiguration preceding Lent, we have a glimpse at the glorified Christ, before we enter the long gruelling time of Great Lent.  We know that Christ must suffer and die, but we know in the end His glorious kingdom will be established.

In our Gospel reading we see that Jesus only took three disciples with him.  These are the same three disciples that he would later take to pray with Him in the garden.  So, what is special about these three and why did he exclude the other nine?

The Fathers tell us that each of these had prominence or preeminence, above the rest of the disciples.  St. Peter loved him exceedingly, St. John was loved exceedingly by Him, and St. James showed his superiority because of his ready response to drink the cup with his brother and his later actions bore out that willingness.  He was the one Herod chose to put to death because he was so earnest for Christ and grievous to the Jews.

Preparation for the Resurrection

These three were given the opportunity to see the glorification of Christ before the suffering and death of Christ.  They were being prepared to receive the Holy Spirit and share about the glories of Christ after the resurrection.  The other nine and the multitudes that followed were not permitted to see this glorification because they had not been as closely taught.  This information about the glorification of Christ might cause them to stumble when they see the suffering of the crucifixion.  I remember one of my professors telling us that God never gives us information to win trivia games.  He gave this information to these three so that they could encourage the rest of the disciples and followers after the resurrection.

The Scribes and Pharisees, a few chapters previously, had asked for a sign from heaven.  Jesus responded to them but did not give them a sign for their perverse or wicked request.  Here Jesus gives a sign from heaven without a request for the purpose of increasing the faith of the apostles.  God knows to whom to give a sign and to whom to withhold it from.

Why Not Three Tents?

The apostle’s response through the mouth of St. Peter was to build three tabernacles or tents for them.  Christ did not respond to this request because it was not wicked but rather inappropriate, since the work of Christ was not finished yet.  He had not yet suffered and died.  It was not yet the time to rest in tents before his ministry was complete.  We read in Hebrews that he sat down after the sacrifice was made for sins.

The fathers also point out the problem with three tents and tents made from human fashioning for Christ.  We are not to seek three tents because the law and the prophets have been summarised and fulfilled in the gospel.  The law and the prophets have become part of the Gospel so there is only one tent and not three.  Furthermore, we are to seek only the Holy Trinity.  The Law and prophets are not ends in themselves, but means through which we can seek the Holy Trinity.

As St. Peter was making his suggestion, one covering, a cloud, appeared over them.  This cloud was made by the Lord and give shade to all of them.  It is kind of reminiscent of Adam and Eve making coverings and the Lord giving them better coverings.  God will make the dwelling of His Son and His people.

Notice that Jesus first touches them and then instructs them.  He first heals them and expels their fear from them and then he gives them doctrine i.e. instruction.  This I believe is the approach that we have to take in our own lives with others.  We must first give others the healing of Christ so that their particular problem is expelled from their lives and then they’ll be open to receiving the instruction of Christ.

Notice also that after Christ, the Word, touched them they looked up and only saw Him.  Moses, the law, and Elijah, the prophets had become one with the Gospel through the touch of Christ.  Without Christ we see them separate and disjointed, but in Christ we see them come together as one.

Christ and the Father are One

In our Psalm reading, we see that to assault Christ is to assault the Father.  We see this unity in our Gospel passage as well.  When Christ does not answer the requests about tents, but the Father speaks and expounds that there is a difference between Christ, Moses and Elijah.

The Lord’s Laughter and Anger

His anger or wrath is not an emotion.  St. Augustin say that it could be understood as the darkening of the mind.  Other fathers tell us that it is calmly judging without abandoning his fatherly love.  It is not a mounting emotion against the wicked but rather a withdrawal of his grace.  Furthermore, his anger will be removed if there is repentance.

Remade into a Kingdom

He is bringing His kingship or as in our Gospel passage the glorification that was seen in the transfiguration to the nations.  In bringing them to his kingdom the passage in our English translations is that he will shatter them like a potter’s vessel.  The sense that I get from the Fathers is that this would be comparable to the potter in Jeremiah.  It is more of a smashing of the soft clay than a shattering of the finished product.  God is remaking the nations into His kingdom.  We see this take place in baptism when the old man is put off and new man is put on.

The apostles and St. Peter in particular in his epistle were eyewitnesses of the glorification of Christ.  St. John in his epistle, another one that was present on the mountain, says he declares what he has heard, seen, looked at, and touched.  The heretics, the fathers tell us, are forced to make up complicated lies because they do not have the benefit of being an eyewitness.

Christ Received Glory from the Father

When the Father proclaimed who Christ was, it does not mean that he was inferior.  The Son received glory and honour from Him in his human flesh and not his eternal divinity.  He was made for a little while lower than the angels.

The prophets and those who spoke in the New Testament were of the same Spirit.  They speak from their whole lives and not just their words.  Willingly and knowingly, they shared what the Lord gave to them.  They spoke of their own freewill.  The Lord did not force any of his prophets even Balaam had the power not to say anything if he did not wish to.  The actions and the words of the prophets spoke of the Lord.  Their words are a lamp to us in this world of temptation.

Their words are also not of private interpretation.  The pagan oracles i.e. people who claimed to convey the messages of the false deities of the time spoke whatever came into their heads, but the prophets spoke and wrote the words of God and not their own words.  Therefore, we can’t interpret them privately because we would depart from the true meaning intended by the author.  As we have often heard we can easily see the result of such private interpretation all around us.  We must wait to hear how the one who wrote the words want them understood.

A point of clarification, the fathers warn us not to think of the prophets or the apostles as a mechanical instrument of the Holy Spirit in the same way as a flutist blows into his flute.  God being the flute player and the prophet the flute.  They say this is ridiculous.  God spoke it to them, and they spoke it out with understanding and different styles.  For example, St. Paul’s epistles have a different style than St. Peter’s.

Let us rejoice that our Lord was glorified and that his kingdom is spreading to the nations.  We must make use of the information revealed to us, to first draw closer to God and second to encourage our fellow believers.  Let us receive the correction of the Father willingly and see that our ideas may not necessarily be in line with his.

We must recognise that the law and the prophets find their fulfillment in Christ and that there is only one dwelling for the law, prophets, and Christ.  We must offer comfort and healing to others before we can proceed instruction.  The healing must come so that they are able to receive the instruction.  God deals gently with us and all mankind, so we are to do the same.

In the epistle reading we see that we can trust the things that are passed down to us because those who wrote were eyewitnesses of the glory of God.  We do not follow cunningly devised fables.  Finally we must seek to understand how the Church has interpreted the Scriptures and not come up with our own ideas.

Transfiguration of Christ, from Art in the Christian Tradition, a project of the Vanderbilt Divinity Library, Nashville, TN. http://diglib.library.vanderbilt.edu/act-imagelink.pl?RC=55374 [retrieved May 12, 2020]. Original source: http://commons.wikimedia.org/wiki/File:Transfiguration_Christ_Louvre_ML145.jpg.