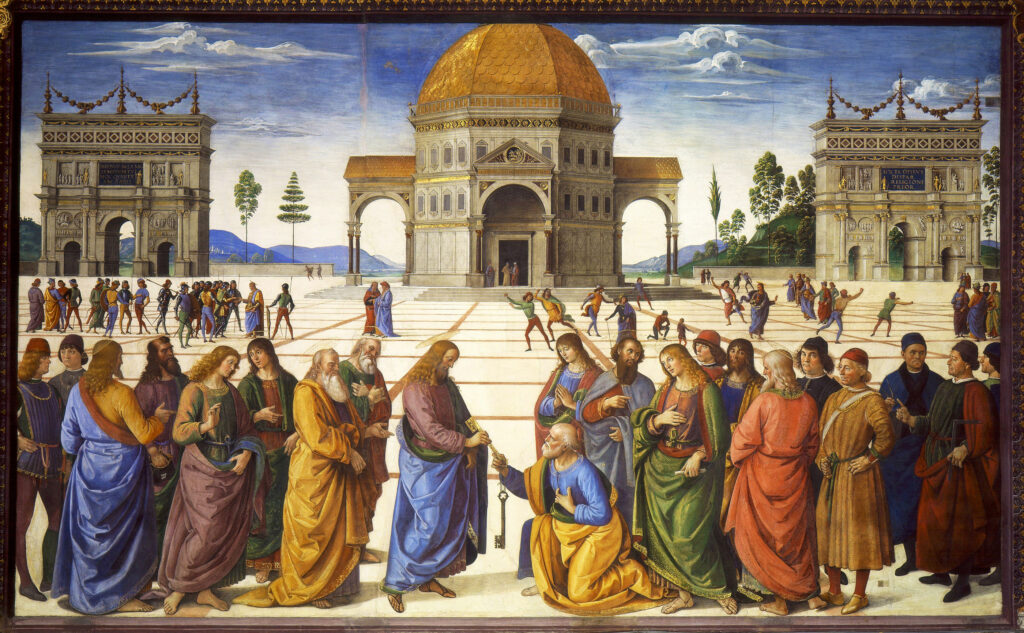 The Fathers draw attention to the fact that he asks these questions in Caesarea Philippi rather than in Judea.  There were a couple reasons for this.  First, he wanted to bring them away from the Jews to the land of the Gentiles, so that they wouldn’t be confined by what the Jews thought in their answers.  They would be freer to speak their mind among the Gentiles, than among the Jews.  He asked among the Gentiles because we are less significant in the eyes of Jews.

Second, the circumstances were to become a prophecy.  The land of the Gentiles was honoured as the place where St. Peter would make his great confession that is not revealed by Flesh and blood.  This points to the future reality that in the Church far more among the Gentiles would confess the Son of Man as Christ than among the Jews.  This was also the city where Cornelius, the first Gentile believer, would confess Christ.

Who is the Son of Man?

Jesus asks this question about the people for two reasons.  First, so that we would know what the understanding of the Jewish people of the time was.  Second, as a precedent for us to learn from.  We need to learn to inquire and learn what the people around us understand about Christ.  If it is bad, or in error then we must seek to remove the cause of that incorrect opinion.  If it is good, then we must seek to encourage them in that understanding.

What are the People Thinking?

In His question for the people, He uses the term the Son of Man to show that he both appears and is also truly fully and unchangingly man and yet at the same time He is very God.  If we look at how He phrases this question, we see that He is not asking the disciples their opinion of what the people think, but what the people are thinking.  God was setting the stage so that we could see the difference between the people’s opinion and the disciples understanding.

Furthermore, Jesus was very particular about when he asked this question.  It was not at the beginning of His ministry, but rather at the turning point of His ministry.  Before this point he had taught them through many things and performed many miracles, so they had context to base their confession on.  After this confession, as we would see in verse 21 if we had read it that He would begin speaking of His Passion (crucifixion and resurrection).

The Deity of Christ

In the second question, we see that the deity of Christ is emphasised more.  Referring to Himself as “I am” rather than the Son of Man.  St. Hilary of Poitiers tells us that St. Peter pondered the difference between these two questions and St. John Chrysostom tells us that Jesus was trying to guide them to think of a higher mental picture than the previous question.  To an answer and a judgement that is more fitting of His dignity.

Therefore, what judgement concerning Himself did He desire?  It was a secret he was asking about, into which the faith of those who believe ought to extend itself.1

Affirmation of the Faith

Through this questioning and St. Peter’s confession, we have a strong affirmation of faith passed down to us to our present day.  This affirmation is very important. In confession we see hear him saying, “You are the Son of the Living God.”  Christ is affirmed as Son which means that there is a Father.  This is also a denial of some if not all forms of Arianism.  You may have run across some people who believe that since Jesus only said that He was the Son of God, He was not claiming deity.  Epiphanius the Latin explains why this is impossible,

If Christ is the Son of God, by all means He is also God.  If He is not God, He is not the Son of God.  But since He Himself is the Son, and as the Son takes up all things from the Father,  let us hold this same one inseparably in our heart because there is no one who escapes his hand.2

God the Father and God the Son are both God and they are distinct persons.  Besides affirming the deity of Jesus, St. Peter’s confession also proclaims that death has no power over Christ.  St. Cyril of Alexandria explains,

Thus, using the definite article, he said, the Christ, the Son of God.  And in calling Him Son of the Living God, Peter indicates that Christ himself is life and that death has no authority over him.  And even if the flesh, for a short while, was weak when He died, nevertheless it rose again, since the Word, who indwelled it, could not be held under the bonds of death.3

St. Peter therefore proclaims through the centuries that Christ is the Son of God the second person of the Trinity, He is fully divine, and that He has overcome death.  He encapsulates the truth of Christmas and Easter into one statement.

The Roman Catholics as I understand take this verse to mean that St. Peter and his See of Rome has primacy over all the other sees and bishops.  As I have looked at the fathers and studied Church history over the last few years, it seems that the truth lies somewhere in the middle.

If you have seen an icon of St. Peter and St. Paul, you will see that usually they are holding up the Church together, neither one is  greater nor is less.  These two Apostles represent the two branches of ministry in the Church Jews and Gentiles.  We see then the Church views the Apostles as equals not one having primacy over another. 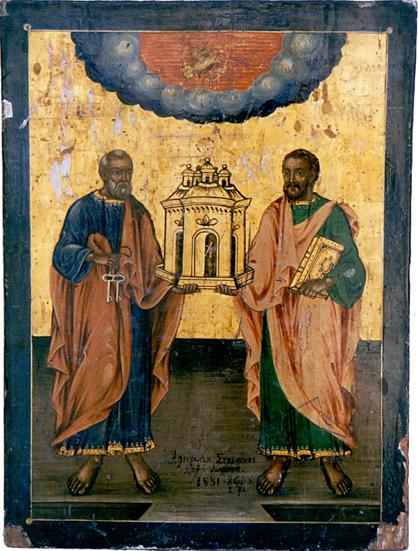 Honour is Due to the Apostles

The error on my part must be addressed as well.  If I am to look at it for what it really is, it is a manifestation of pride.  I am saying that the Apostles have no greater honour than I have and since they made this confession before me, it was merely a circumstance of history.  However, we must honour St. Peter and the other Apostles since it was upon their confession that Christ has built the Church and the gates of hades have not overcome it.

Why is St. Peter blessed?

The fathers point out that others such as Nathanael and the disciples after the storm had affirmed Him as the Son of God.  What made the difference in this particular case?

The difference St. John Chrysostom tells us is that it was revealed by God and not man and that St. Peter acknowledged Christ as very Son.  It was at this point that this affirmation of Christ changed from a human opinion to a divine doctrine.  Many would say after him by the Father in Heaven that Christ is the Son of God, but He was the first.

This is the point where St. Peter is transferred from being a disciple to being a shepherd.  It was now the beginning of his responsibility for those who were on the edge of believing and those who would believe in the future.

First Pillar of the Church

This is a great reward that St. Peter is the first apostle appointed as a pillar of the Church.  The rest would later join him.  One of the Fathers tell us that this confession is the foundation for everyone who intends to build their house of faith.  He warns that no matter how many virtues that we add after we have laid the foundation that if it has been laid upon a different foundation, it would be the same as if the whole structure was rotten and ready to collapse.

The gates of hades are those who would stand opposed to the Church of God.  This is both those who would physically persecute, martyr, slander, etc. and also those who would seek to introduce heretical doctrines into our Orthodox confession.  This Father concludes by telling us that if we have been established on the confession of Christ, even our sins will not prevail over us.

This authority of binding and loosing while initially given just to St. Peter here, would after the resurrection be given to the other apostles and has been passed down to the Bishops in every age and is in their care to this day.

Let us rejoice that God has had compassion on us Gentiles to extend salvation to us as well as to the Jews.  Let us praise God that we were honoured with this confession and blessing in our land.

We must confess that Jesus is both fully God and fully man and that He as life has overcome death and hell.

Let us remember to give St. Peter and the other apostles the honour that is due them for giving the foundation confession of the Church.  Let us always affirm the divine truth that Jesus is the Son of God.

Finally, we must be particular that our faith is based on an Orthodox confession.  This morning we are focusing on the person of Jesus Christ but make it a priority to know all parts of the Nicene Creed and why it is important that we confess these various points of belief every time we meet.  Our whole Christian life is in danger of crumbling if we forsake our confession.  If you are older, you probably know people that you grew up with that have turned away.  If you are younger, you can probably ask those who are older about people that they know who have turned away and the heartache that it causes them.

Perugino, approximately 1450-1523. Christ gives the keys of the kingdom to Peter, detail, from Art in the Christian Tradition, a project of the Vanderbilt Divinity Library, Nashville, TN. https://diglib.library.vanderbilt.edu/act-imagelink.pl?RC=55925 [retrieved March 29, 2022]. Original source: http://commons.wikimedia.org/wiki/File:Entrega_de_las_llaves_a_San_Pedro_(Perugino).jpg.