The History of the Theotokos

Today we look at the Annunciation to St. Joseph.  The tradition of the Church tells us that the Theotokos grew up in the temple until she was twelve.  When she was twelve it was no longer permitted for her to be there so the priests looked through Israel for a suitable husband for her.  They cast lots to know the will of God and the lot fell to Joseph.  He, being old, attempted to refuse the selection but the High Priest told him the lot was the will of God and Joseph must not refuse God.

The Theotokos was betrothed to Joseph for the next two years and the annunciation to her and the conception of Christ occurred while he was working in another region.  Our passage opens when he returns and is perplexed as to what to do.

The Theotokos is with Child

She was found to be with child.  How was she with child without being with a man?  This is the question that caused Joseph so much trouble and has caused centuries of meditation and contemplation.  St. John Chrysostom tells us it is not our place to figure out exactly how it happened.  He states if we were to know, then either St. Matthew or Gabriel would have explained.  We must be content to know that the conception came from the Holy Spirit.

He furthermore warns that we aren’t to imagine that we understand what happened by saying that it is the work of the Holy Spirit.  His birth or in Chrysostom’s words His generation is a mystery.  We remain ignorant of many things while learning of them.  He then asks this series of questions,

[H]ow the Infinite is in a womb, how He that contains all things is carried, as unborn, by a woman; how the Virgin bears, and continues a virgin. How, I pray thee, did the Spirit frame that Temple?1 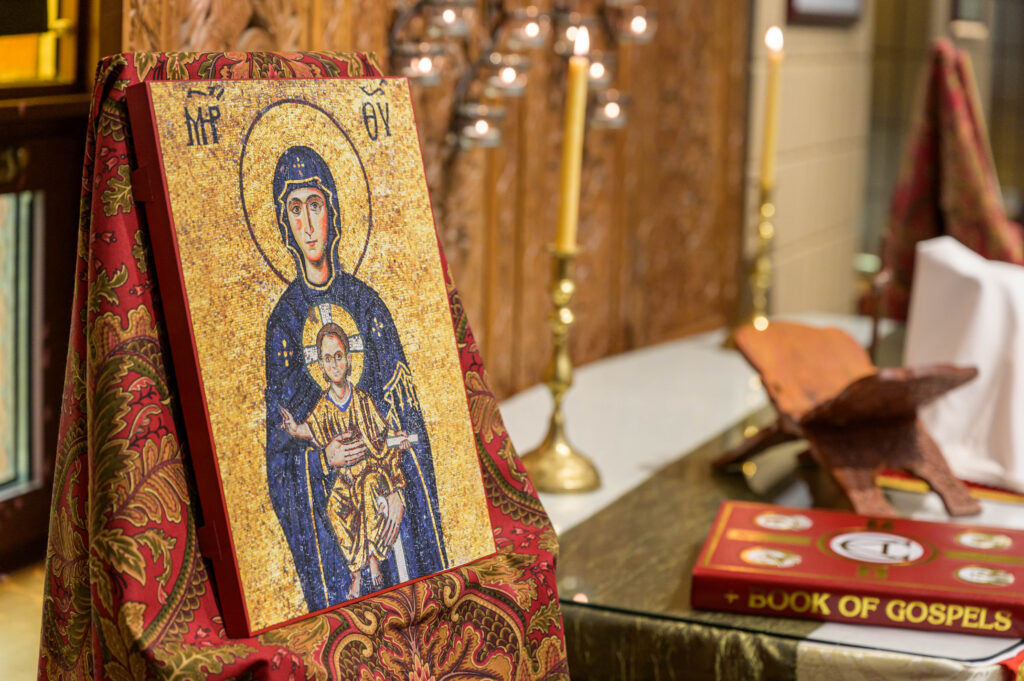 These questions leave us in wonder and worship to God of what He has accomplished.  In this verse we cover the first two stars on the Theotokos icon.  She was a virgin before the conception – the first star and she was a virgin as she carried God in her womb – the second star.

Conception by God or Man?

Another one of the Fathers asks the question, “Does the conception of a woman depend on a man?”  If we look through Scripture, we see that God is the one who opens and closes the womb.  We remember the words of Jacob to Rachel, “Am I in the place of God, who has withheld from you the fruit of your womb?”

We see then that it is not when man so desires that a woman conceives but when God so desires.  This father then asks the question,

Therefore, if a woman’s conception does not depend on a man but God, what is so incredible if God should wish to give her offspring without a man?2

Furthermore, it was not fitting that the only Son of God should be born in the normal human way, since Christ was not born for himself but for us and all humanity.  He was for sure born into flesh that would undergo corruption, but He was born to heal that corruption.  The state of a virgin is incorrupt and human corruption does not come from a virgin.

The purpose of His birth is different than our births as well.  We are born so that humanity might exist, He was born out of His merciful will to save.  It was right that He was born contrary to human nature because He was beyond human nature.

Christ would be born of a virgin betrothed as an example of what would happen for all the saints.  We are born from the virgin church which is betrothed to Christ.  Remember, the marriage supper of the lamb has not yet happened.  The Church is the promised or betrothed bride of Christ.

St. John Chrysostom points out that it is very interesting what Joseph decides to do here.  There was no precedent for it.  He was faced with a dilemma, to keep Mary in his house was a transgression of the law but to expose her would be to deliver her to death.  He chooses to put her away secretly.  St. John Chrysostom tell us this shows us that grace was beginning to shine forth and change the way people acted.  Christ was already here in the womb of the Theotokos.  He was beginning to cast light on the world which caused Joseph to act in a manner of the heavenly kingdom rather than according to the Old Covenant.

God, however, is merciful and appears to Joseph to explain what has happened.  He is made aware of the heavenly mystery so that he might know the truth of the pregnancy.  He is also made aware so that he will not fall into the sin of jealousy and suspicion and be able to receive the good of the mystery.

Let us also take note of the order of this mystery: in the garden the devil spoke to Eve the first virgin and then to man that he might give to them the word of death.  Now, in the incarnation, the announcement of the undoing of corruption is done in the same order.  The Theotokos first and then Joseph receives the angelic visitation.  St. Chromatius states,

Woman was given the honour to bring salvation to mankind.  In the incarnation, any reproach she had from the garden of Eden is taken away.  Furthermore, it had to be a union between God and a virgin since corruption comes through man.  Woman is taken from being the entrance of sin into the world to being the entrance of salvation into the world.  Woman has done far more than any mortal man could ever do in the working of our salvation.

Joseph Cares for the Theotokos

What is meant by, “Do not fear to take Mary as your wife?”  It means to take her into his house and not put her away because she has been entrusted to you by God.  The angel was telling him that Mary was being committed to him not for marriage, but to dwell with him.  In the same way that John the Apostle would be entrusted with the Theotokos at the crucifixion, Joseph was being entrusted now.  God saw to it that she was a virgin and that she had protectors throughout here whole life.

The one Father points out that there are three main reasons that the angel appeared to Joseph.  First, so that an ignorant but just man would not do an unjust thing, for a just reason.  Second, for the honour of the Mother of God.  By keeping her in his house she would be protected from shame.  Third, so that Joseph would know it is a holy conception and would not have relations with her in the future.

This third point is the third star on our Theotokos icon – her perpetual virginity.  Being raised in Evangelical Protestantism this is a point that took me a bit to accept a few years ago when I began to look into it.  However, the Fathers are emphatic on this point and seem a little baffled that anyone would consider her having relations with anyone else.  They also point out that to say so would be to impugn or slight the character of Joseph.  They state that he is just man and that there is no way that he would have done so.

St. Joseph had no part in the conception.  However, God gave him the honour of naming the child.  For though the offspring was not his own, he was called to give a father’s care to him.  We then have the two names that always kind of puzzled me.  The angel tells Joseph to call His name Jesus, but the prophecy that St. Matthew cites His name as Emmanuel.  St. John Chrysostom explains,

Because he said not, “thou shalt call,” but “they shall call,” that is, the multitude, and the issue of events. For here he puts the event as a name: and this is customary in Scripture, to substitute the events that take place for names. Therefore, to say, “they shall call” Him “Emmanuel,” means nothing else than that they shall see God amongst men.4

He is to be named Jesus because He is to be a Saviour.  He is a Saviour in a way that will exceed all expectations.  The people of the time were looking for a saviour like Judas Maccabees who would deliver them from the Roman oppressors.  However, Christ was not a Saviour from visible oppressors but from something greater.  He is the Saviour from sin.  This work of salvation had never been possible up to this point.  We have an understanding of this in the story of the paralytic, when the Pharisees ask, “Who can forgive sins but God?”  Forgiveness of sins has come down to man through Jesus.

We see here the union of the 1st Testament with the 2nd Testament.  The grace that had been prophesied for generations and which the prophets of old had rejoiced in was now come.  Christ’s birth did not happen by chance but was predicted from ages before.  Let us rejoice this morning as we look at the candle of joy that our Saviour came to bring salvation from sins.

Let us rejoice in the mystery of the incarnation.  While we should not pry into the details of how it was done, we ought to praise God that it was effected by His Holy Spirit.

Furthermore, we ought to take time to praise God for keeping the Theotokos a virgin or pure before, during and after the incarnation.  Although we will never be able to understand it.

Let us also praise God that through His incarnation, he was able to heal the corruption of the flesh.  We can also rejoice that we are made saints through the virgin church, just as Christ was born through the Theotokos.

We ought also to praise God for the mercy that He showed to Joseph in explaining what had happened with Mary.

Finally, let us also praise God that he undid the fall in the same manner as the devil perpetuated it.  We ought also to praise God for the honour that he has restored to women through the Theotokos.