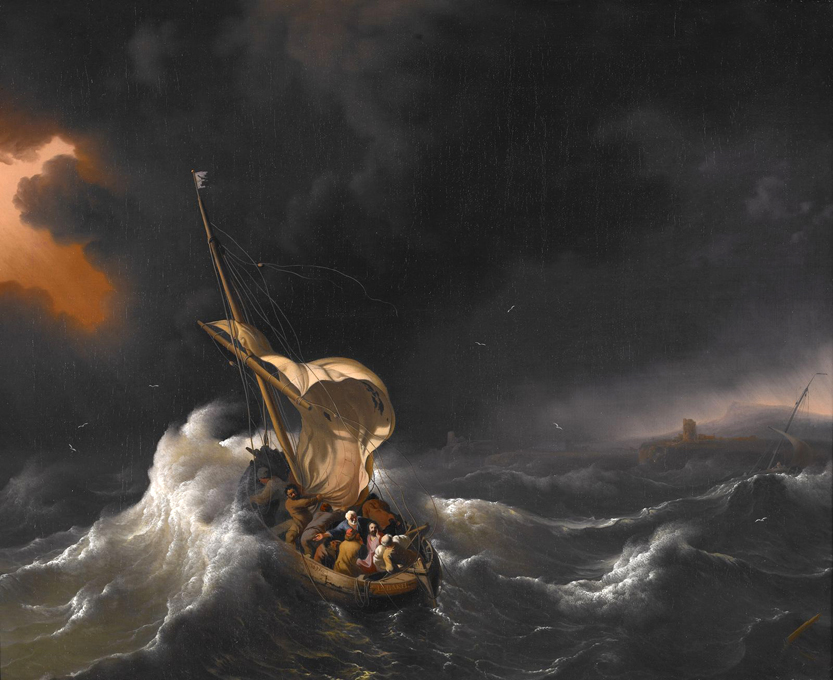 The theme in the lectionary for the passages we read today is the God deliverance.  In the Gospel and Old Testament passages the Fathers look at the passage on two different levels.  First there is the historical level i.e. what actually happened and secondly on a spiritual level.  However, they do not have such a crisp and defined distinction between the two.  We’ll begin by primarily looking at the historical level and finish with primarily looking at the spiritual level

Calming of the Sea

Through chapter four of Mark, Jesus had been teaching and explaining both publicly and also privately to his disciples.  The day had come to a close and now they were going to cross over to the other side.  After this day of teaching Jesus falls asleep very likely he was exhausted from the day.

I can see someone falling asleep very easily from the gentle lapping of the water against the boat.  I know last year, I spent an afternoon with a friend on the Rideau canal and on the way back it was a struggle to stay awake.  There is just something about water that makes you sleepy.  We see a glimpse of the mystery of the God-man here, in that he who is the rest of the weary himself grew tired.  So, whether it was exhaustion or not, we do know he fell asleep to the extent that the storm didn’t even wake him up.

The disciples, on the other hand, are wide awake and fearing for their lives, they awaken the Lord and question his care for them.  He immediately speaks to the wind and the sea and there is calmness.  He then asks about their faith and they are in amazement of what has occurred and wonder who He is.

As I studied this passage, I discovered that it has caused bafflement for many throughout history.  The disciples clearly called to the Lord, but they were rebuked for having no faith.  Sifting through what many have written the consensus seems to be that they cried out in fear and not in faith, for they are wondering at the end who has the power to calm the sea.

Tertullian points out to us that when he disperses the waves, Habakkuk’s words are fulfilled, where he says “Scattering the waters in his passage.”  When at his rebuke the sea is calmed, Nahum is also verified: He rebuketh the sea, and maketh it dry”1.

In I Samuel we see another example of one without fear in the midst of a group of terrified men.  His and Israel’s opponent, Goliath, was protected by the power of his weapons and the strength of a full set of armour.  David had none of that, but he was strengthened by his faith.  He would later write, “Some trust in chariots, and some in horses: but we will remember the name of the Lord our God.” and again in today’s Psalm reading we see that those who have a perfect knowledge of the name of God trust in no other thing.

David, furthermore, had experience of the Lord delivering him from both a lion and a bear and expected it to be no different in this case.  He, therefore, went out in full expectation of victory because he trusted the Lord, of him it could not be said, “How is it that ye have no faith?”.  He went out and as we know the giant was defeated. 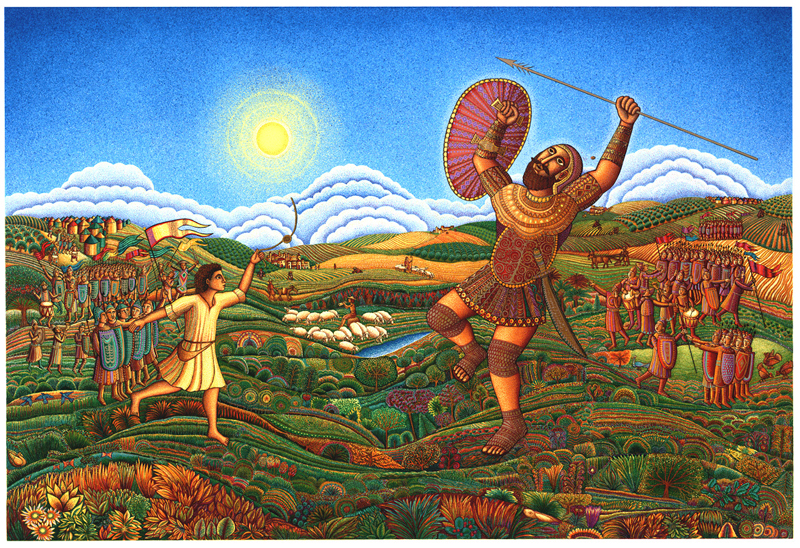 A number of the Fathers have focused in on the use of a stone.  Paulinus of Nola, one of the Father’s states, “Having trust in Christ, consigning everything to the God of powers, regarding God alone as all that is highest this has always been [effective] in achieving every good.  This is the faith that has prevailed over all weapons.  This was the strength that made that slight boy great, for he grew stronger by spurning weapons and brought low the armed giant by the power of a stone.2”

The Stone is Christ

Others are even more specific seeing that the stone is figuratively Christ himself.  They cite Psalm 118:22 “The stone which the builders refused is become the head stone of the corner.”, and also St. Paul in I Corinthians 10:1-4 – Moreover, brethren, I would not that ye should be ignorant, how that all our fathers were under the cloud, and all passed through the sea; And were all baptized unto Moses in the cloud and in the sea; And did all eat the same spiritual meat; And did all drink the same spiritual drink: for they drank of that spiritual Rock that followed them: and that Rock was Christ.  They conclude from these passages that the stone that David slung was either Christ or was working together with Christ.  “Therefore, let us take in our hands that stone, I mean the cornerstone, the spiritual rock…in David’s case, it was not the visible stone but the spiritual stone which sank into [Goliath’s] head…’Our weapons are not merely carnal but spiritual, demolishing [false arguments] and reasoning and every proud height, that raises itself against the knowledge of God.’” – Chrysostom4

Returning to our passage in the Gospel of St. Mark, we can easily come into judgement over the apostles.  If David had faith and worked with Christ in the face of the Giant, why couldn’t they have faith in the midst of the storm?  This we must not do.  It has been well said, “hindsight is 20/20.”  We must remember that it wasn’t until after the resurrection, that Christ opened their eyes to the things in the Scriptures about him.

The Church as the Ship

The Father’s as I mentioned at the beginning do not leave this story as a mere historical event, but they see the life of the church in it.  “For as many are in the little ship of faith are sailing with the Lord; as many as are in the bark of holy church will voyage with the Lord across this wave-tossed life; though the Lord himself may sleep in holy quiet, he is watching your patience and endurance: looking forward to the repentance, and to the conversion of those who have sinned.  Come then to him eagerly, instant in prayer.” – Origen5.

St. Augustin also applies it to us, “When you have to listen to abuse, that means you are being buffeted by the wind.  When your anger is aroused, you are being tossed by the waves.  So when the winds blow and waves mount high, the boat is in danger, your heart is imperilled, your heart is taking a battering.  On hearing yourself insulted, you long to retaliate, but the joy of revenge brings with it another kind of misfortune – shipwreck.  Why is this?  Because Christ is asleep in you.  What do I mean?  I mean you have forgotten his presence.  Rouse him, then; remember him, let him keep watch within you, pay heed to him…A temptation arises: it is the wind.  It disturbs you.  It is the surging of the sea.  This is the moment to awaken Christ and let him remind you of those words: ‘Who can this be, even the winds and sea obey him?’”6

Having Faith in the Storm

For us then, we must determine not to have received the grace of Christ in vain.  As part of the church, there is an intense storm around us.  In our individual lives there may be storms of varying degrees.  It is not the time to focus on Goliath and the waves and be overcome by fear as the Israelites and the apostles.  We must have the faith of David and awaken Christ in faith.  It is by the power of the Holy Spirit living and indwelling in us that we can do this.

Remember St. Paul’s claim we cause no one to stumble in anything.  It is not that we avoid these attacks, but how we respond to them.  If we respond in retaliation and revenge we are refusing the grace of God and the Holy Spirit.  We must determine to bless those who curse us.  Love those who hate us.  Pray for those who persecute us, all by the power of the Holy Spirit.   These are the big things, but we must already be in the practice of turning good for evil.  When someone annoys do we respond irritably or in kindness, when things don’t go our way, do we thank God for what has happened anyway, or when people fail and disappoint us, do we turn to the one who will never disappoint us?  It has been said that the journey of a thousand miles, begins with one step.  We must learn to look to Jesus in the little things so that when the big things arise it will be our natural response to receive them as from Him.

Backhuysen, Ludolf, ca. 1630-1708. Christ in the Storm on the Sea of Galilee, from Art in the Christian Tradition, a project of the Vanderbilt Divinity Library, Nashville, TN. http://diglib.library.vanderbilt.edu/act-imagelink.pl?RC=54955 [retrieved September 17, 2018]. Original source: http://commons.wikimedia.org/wiki/File:Backhuysen,_Ludolf_-_Christ_in_the_Storm_on_the_Sea_of_Galilee_-_1695.jpg.