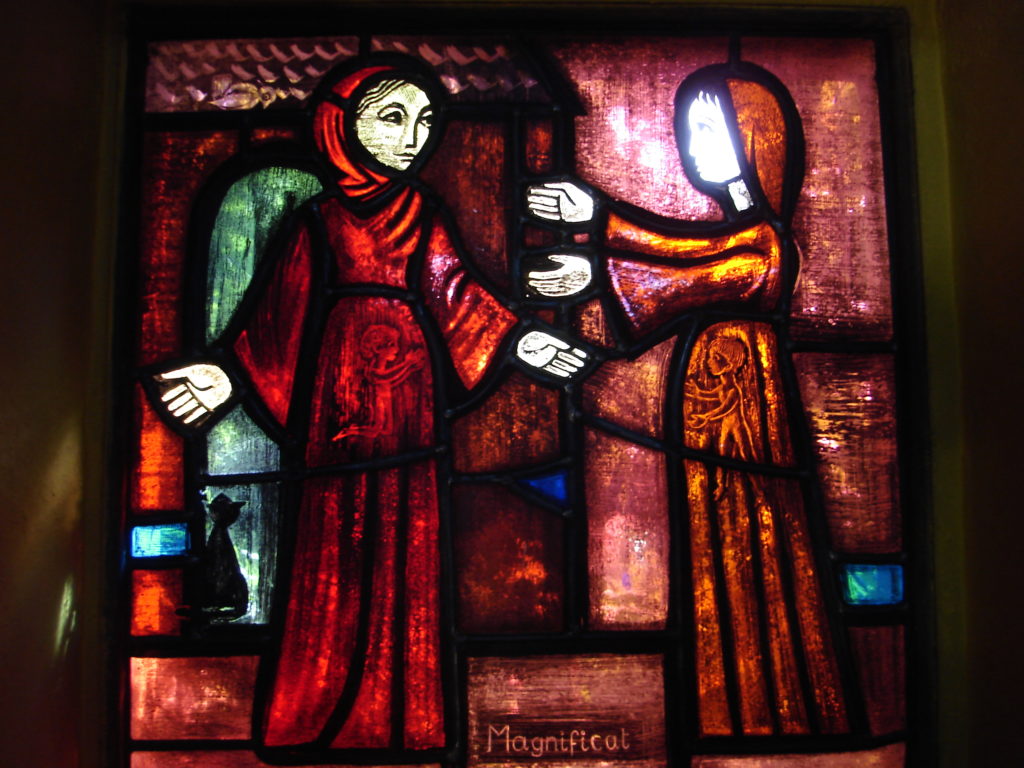 In the name of the Father, the Son and the Holy Spirit,

Mary’s Visitation and the Magnificat

Today is the 4th Sunday of Advent, in which we celebrate the visitation of the Virgin Mary to Elizabeth.  The incarnate presence of the Messiah draws from Elizabeth a worshipful response in a psalm like, liturgical style.  This passage can be divided into two.  First, Holy Mary journeys to Greet Elizabeth and second, Holy Mary’s Song or Magnificat.

This is not lesson on Biblical proofs for life beginning at conception, but…I don’t think you can get around it.  However, here also, is another place the Enemy has stolen the Holiness of the situation: We would do well to believe and accept what God says in this situation.  Most of us, have, at best, a certain uneasiness about anything that has to do with the Mother Mary.  Please do your best to let the destroyers lies and confusions fade away during this time.

Really, we don’t have Christmas, the Cross or the resurrection without the Mother of our Lord’s humility.  St Augustine says, “This case stands out as utterly uncommon and new, because it took place in a womb, and at the coming of her who was to bring forth the Savior of humankind.” Instances of leaping not only in children, but even in animals, are not uncommon although certainly not for any faith or religion or intentional recognition of someone’s coming. this leaping, “this greeting, so to speak, offered to the mother of the Lord is miraculous.1”

It is considered to be among the great signs.  It was not  by human means, but by divine means in the infant, as miracles are usually done.  Our Lord was barely formed and St. John who was also only five months old, from within the womb recognised Him.

Not yet born, already John prophesies and, while still in the enclosure of his mother’s womb, confesses the coming of Christ with movements of joy—since he could not do so with his voice.2

As Elizabeth says to holy Mary, “As soon as you greeted me, the child in my womb exulted for joy.” John exults, then, before he is born.  Before his eyes can see what the world looks like, he can recognize the Lord of the world with his spirit.  In this regard, I think the prophetic phrase is appropriate: “Before I formed you in the womb I knew you, and before you came forth from the womb I sanctified you.”3

Mother and Baby full of the Holy Spirit

“Since John could not cry out in his exultation and render witness to his Lord, his mother began to say, in the Holy Spirit”, for God brought these words about Mother Mary, “You are blessed among women, and blessed is the fruit of your womb. Our Lord prepared his forerunner, even in a [barren] womb.4”

Elizabeth, carrying in her womb, the one of whom no one of those born of woman would be greater Matt 11 & Luke 7, rejoiced that the Creator had come there.  “[H]e who, conceived from the flesh of a virgin mother, would be called, and indeed would be, the Son of the Most High.5”  The presence of God, Whom St John was to proclaim…

Catch what happens … our response should be similar.  As soon as Elizabeth saw the one who had come to her, she recognized that she was the mother of the Lord.  In her humility, she couldn’t find in herself any reason by which she might have become worthy to be visited by such a guest.  We would do well to deeply understand the significance here…Other events among humans pale in its light…What event is greater than that…Don’t get confused by the modern movie portrayals…

The Magnificat provides the theological significance of this meeting as Mary sums up her place in salvation history as she proclaims the new kingdom.  How often in the liturgy…or prayers…Mary does not add anything to God by her song, but through the Magnificat, her song,which we recite often in times of prayer, Christ is magnified in us, through our image of him, in our soul.  The Seed of Abraham now rests in Mary’s womb, the fulfillment of the covenant God promised.  Through Mary’s Son, God will give birth to the church—Abraham’s eternal seed.

Carry the Life of God

And for us … what is the practice (practicable) relevance?  We are the ones now, to carry the life of God into the world.  We, unworthy, like Mother Mary and Elizabeth, would do well to keep our lowly state firm in our understanding.  In this scene, the prophetic, divine and physical meet.  It should do two things.  First, put to an end the heresy of “thinking” our way into heaven – thinking is NOT supernatural or spiritual. And, secondly, it should awaken us to the impact of the Incarnation.

It will be helpful to read “On the Incarnation” By: St. Athanasius.  Everything, literally – was impacted by the entering of God in the flesh into His creation.  As we walk the next few weeks and then further into the new year – try to cherish and stir up what has been lost to us by the enlightenment – enjoy the life of God with you, with us.

Glory to the Father …