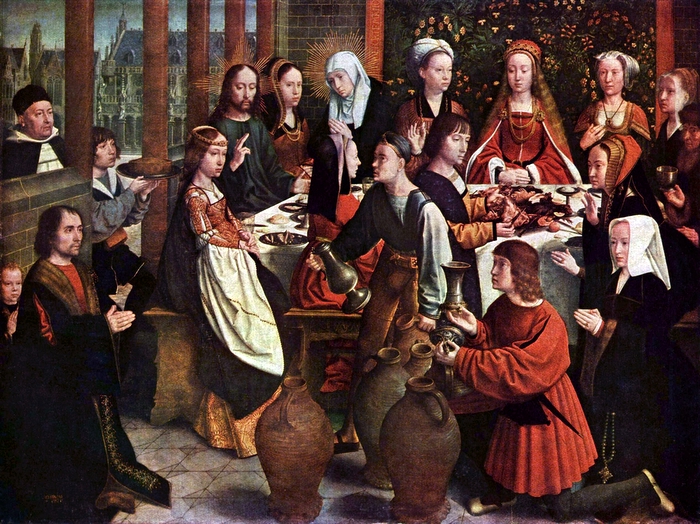 In the name of the Father, and of the Son, and  of the Holy Spirit,

According to the chronology in St John’s Gospel, the wedding was held three days after his baptism.  Jesus and his disciples had been invited while His mother was already there, then the wine ran out.  There are lots of other cool things that are details – I’ve heard many sermons about all these details.  What we’re after in this blog, is – what do I “do” with this instruction from the Holy Gospel.  I’m not really interested in filling my head – but, how can I be growing into Christlikeness …

Christ and the Church

The fathers make all this about Christ and the Church, – his bride.  There are also certain ones who make note that – Christ’s acceptance of the invitation and his presence, sanctifies the sacrament of marriage.  He instituted it and He here approves and even participates – by providing the joy.  He makes the wine. At least 120 gallons of it — not much concern about being prudish.  There would certainly be enough for the celebration and to provide for the couple in the future as well.

Here is a take away from St John Chrysostom:

We know from the Gospel of St. Luke that Jesus greatly honoured his mother since he tells us that Jesus was subject to his parents.…For where our parents throw no obstacle in the way of God’s commands, it is our duty to be subject to them.  But, when they demand anything at an unseasonable time or cut us off from spiritual things, we should not be deceived into compliance.1

Certainly we can see this a fulfillment of specific prophecy – Isaiah 9:1

And leaving Nazareth, he [Jesus] came and dwelt in Capernaum, which is upon the sea coast, in the borders of Zabulon and Nephthalim:

That it might be fulfilled which was spoken by Esaias the prophet, saying,

The land of Zabulon, and the land of Nephthalim, by the way of the sea, beyond Jordan, Galilee of the Gentiles;

The people which sat in darkness saw great light; and to them which sat in the region and shadow of death light is sprung up.

Interestingly, and this may be a help to those who are really digging into the things we’re learning in our church – St. Matthew’s Gospel uses the text of the Septuagint, not the Hebrew versions: Regarded as the KJV (or best translation) of the 1st Testament.  The Septuagint is the earliest existing Greek translation of the Hebrew scriptures from the original Hebrew.  It is estimated that the first five books of the Old Testament, were translated in the mid-3rd century BCE and the remaining texts were translated in the 2nd century BCE.  This and other texts were used in the 1611 translation – which includes what we call the Apocrypha.  Not removed until Luther’s translation (1200 years later) – many still use it today.

Anyway – back to the lesson…“This beginning of miracles did Jesus in Cana of Galilee, and manifested forth his glory; and his disciples believed on him.”  Just as the Septuagint reads, “Drink this first. Act quickly.”

For the land of Zebulun and the land of Naphtali were the first to see the miracles of Christ, that they who first saw the Lord perform a sign would be the first to drink the potion of faith.  The evangelist John reports that Jesus performed this, his first sign, (our Lord had a ministry of signs) changing water into wine, when he was invited to attend a wedding in Cana with his disciples:

According to the Hebrew, it is also said to be the first time that the [lifting of the] burden of sins was revealed, because the Saviour first preached the gospel in the region of these two tribes.…

One of the Father’s says,

“It is he who came down to earth to invite his beloved to marriage with his highness, giving her for a present the token of his blood and intending to give later the dowry of his kingdom.”2

A Miracle to Manifest His Glory

So, when the wine runs out, Mother Mary turns to Jesus expecting a miracle—but where did she get such an idea since this was the first miracle John relates to us?

It’s important to notice – there is no argument or lack of love between them.  Our Saviour doesn’t scold her, as some have suggested.  She, His holy Mother, also doesn’t respond back to Him.  She simply directs the servants to “do what He says”

There is a lesson here for us …The miracle was not done out of necessity but rather to manifest his glory, which would only be fully manifested when his hour had come on the cross.

As the creator of time, Christ knew what the most appropriate hour would be for him to accomplish his work, but he also honoured his mother and so performed the miracle at the proper time.

A Miracle at St. Mary’s Request

There is much discussion here, that Mother Mary persuaded our Saviour to act as she requests.  Certainly, He obeyed her while growing up.  Of course then, this could lead to others asking her to intercede for them  For Him this was no big challenge – He made the water from nothing, not much to make water into wine then.  He who was tempted to make bread out of stones … this was also not a challenge for Him.

Pictures of the Incarnation, Resurrection, and Eucharist

After Mother Mary’s body being sanctified immediately by His incarnation …We’ve talked about that already – the leaping of The Forerunner and Elizabeth’s exclamations.  Water was the first element to be touched at His baptism.  Now water is being turned to wine.  Wine will soon be turned to His blood — for our healing.  This demonstration of His deity and humanity combined, is proof of His recreation of the fallen world.

He sealed and confirmed these two uncertainties, that of his birth and of his death.  For these waters, with regard to their nature were turned into the [fruit of] the vine, but without the stone jars [themselves] undergoing changed in their nature inwardly.  This was a symbol of his body, which was wondrously conceived in a woman, and, without a man, miraculously formed within the Virgin.

He made wine from water, therefore, in order to give proof concerning how his conception and his birth took place.4

[Jesus] once changed water into wine by a word of command at Cana of Galilee. Should we not believe him when he changes wine into blood? It was when he had been invited to an ordinary bodily marriage that he performed the wonderful miracle at Cana. Should we not be much more ready to acknowledge that to “the sons of the bridal chamber” he has granted the enjoyment of his body and blood?5

Changing water into wine is no different from changing wine into blood and so we continue to obey, as we celebrate the mystery of the changed wine in every Eucharist service.  The water was changed by a word, and the wine also is by words “this is my blood”.

Instruction on Partaking of the Eucharist

When we receive the elements (interesting that we call them that) elements – the building blocks of re-creation.  We are agreeing – with the word “Amen” as we receive each of them.  We make a cradle of our two hands to receive the bread and take it in to our mouths.  Please don’t chew it – let it melt even as you receive the wine.  As you taste the wine, remember where it came from.  This is the account of re-creation from the Bible – just as Jesus told us, “this is my blood”.

Here again is another tactile, way of connecting our bodies with our soul and spirit.  No wonder so many have been tricked into only “remembering”, a mind game – rather than experiencing God, in this way.

Glory be to the father …

David, Gérard, ca. 1460-1523. Miracle at Cana, from Art in the Christian Tradition, a project of the Vanderbilt Divinity Library, Nashville, TN.http://diglib.library.vanderbilt.edu/act-imagelink.pl?RC=46657 [retrieved May 2, 2019].