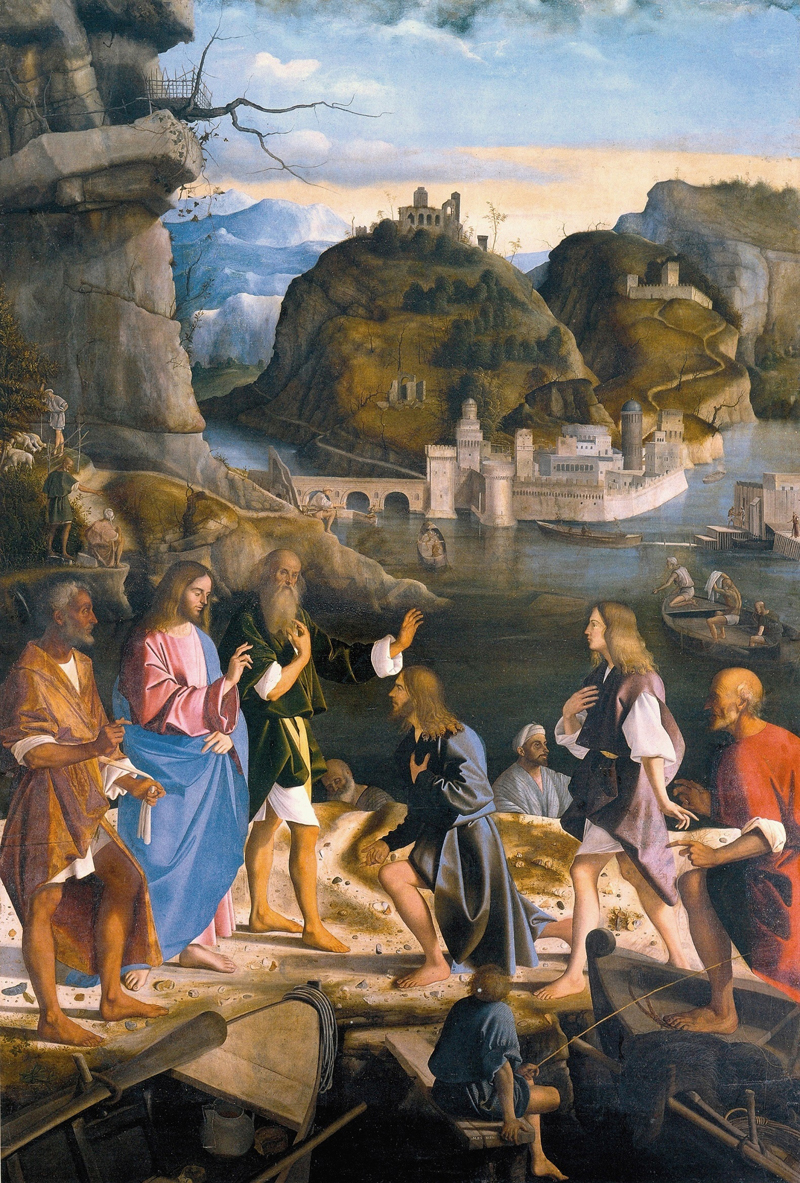 In the Name of the Father, the Son, and the Holy Spirit,

In these passages we have three statements of humility – two from apostles and one from a prophet.  Our theme from our Lectionary is Called to Build His Community.  I believe that humility is a big part needed in building that community.

Let us first take a look at Simon Peter.  I learned a song about this incident at a quite young age and I am sure that many of you have been familiar with the story for a long time as well.

There are physical tangible things in this story that are pointing us to greater spiritual truth, Jesus getting into the boat to teach, fish being caught, two boats, etc.  Let us look at some of these in detail.

First, Jesus chooses to enter Peter’s boat.  There were two boats, but one was chosen.  Maximus of Turin tells us that this was the synagogue and the faithful church.  Jesus chose the church as the instrument in the new covenant to reach the world.  Both fish for the salvation of humankind, but in the new covenant the task has been given to the church.

This boat [the church] sails upon the deeps of this world, so that, when the earth is destroyed it will preserve unharmed all those it has taken in.  Its foreshadowing can already be seen in the Old Testament.  For as Noah’s ark preserved alive everyone whom it had taken in when the world was going under, so also Peter’s church will bring back unhurt everyone whom it embraces when the world goes up in flames.  And as a dove brought the sign of peace to Noah’s ark when the flood was over, so also Christ will bring the joy of peace to Peter’s Church when the Judgement is over.1

The boats do not merely point us to the synagogue and the Church, they also point us to the two peoples i.e. the Jews and the Gentiles.  Simon and the others had toiled all night reminding us that up to the time of Christ the prophets had been toiling in the words of warning and exhortation but now in Christ salvation has come to all.

St. Ambrose of Milan points out that nets bring the fish alive into the boat just as we are pulled out from the depths of sin to the glorious life above.  The Venerable Bede notes that the nets are broken, but the fish do not escape because the Lord preserves His own amid the violence of persecutors.

After this miracle, Simon Peter says, “Depart from me; for I am a sinful man, O Lord.” (Luke 5:8)  This parallels the prophet Isaiah’s words, “Woe is me! for I am undone; because I am a man of unclean lips, and I dwell in the midst of a people of unclean lips: for mine eyes have seen the King, the Lord of hosts.” (Isaiah 6:5).  They are both cleansed and given a commission.

While Isaiah’s description of what happens uses a lot more imagery, what is happening is virtually the same.  In the Gospel we hear Jesus’ words, “Fear not;”.  In the prophecy of Isaiah we see what is happening behind the scenes in the spiritual realm.  Fire is brought from the altar to purify the lips.  Do not be afraid contains all of what we see in Isaiah.  If we are feeling afraid in the presence of God, let us also ask for this cleansing.

The Essence and Existence of the Father

Let us back up a bit to the beginning of chapter six of Isaiah.  We are brought into the throne room of the Lord.  Isaiah, in his description, is revealing the Father’s existence but not his essence (which cannot be seen.)  In other places throughout Scripture we see descriptions of his existence telling us of different facets of his being, but never of his essence which is beyond our understanding and does not have various forms.  “God’s essence, however”, Theodoret of Cyr tells us, “does not  have different forms, because God is incorporeal, indivisible, simple, invisible, and inaccessible.”2

This description of the Lord has caused wonder in the eyes of the Fathers.  He who does not have a body sits!  He who is everywhere is lifted up!  How can these things be?  The description of sitting they surmise is to accommodate our feeble understanding.  His being lifted up means not in a physical way.  Cyril of Alexandria tells us “[t]hat would be foolish and absurd.  Rather that the throne is said to be lifted up means that the reign of God transcends all things.  That God is sitting refers to his immovability and that his blessings are everlasting and unchanging.”3

The Fathers are unsure whether the two Seraphim are a concealed reference to the Son and the Holy Spirit or if they are merely angels.  They are, however, agreed that this thrice declaration of holiness is indeed a reference to the Trinity of God.  They say holy three times in reference to the three persons but use the singular for Lord so we know that they are referring to the essence of deity.

These angels also proclaim, that the whole earth is full of his glory.  This is a reference to the Incarnation of our God and Saviour; because after the appearing of the Master, the nations received the illuminating ray of divine knowledge.  This also has bearing on what we earlier saw with St. Peter and the Lord.  Jesus had entered his creation and was able to directly say to St. Peter, “Fear not;”.  Heaven has come to earth and purification can take place in the here and now and not just in visions.

For us how are our lips cleansed?  Cassiodorus gives us the answer.

We must especially follow the commandments, and signing our lips with the seal of the cross we must pray to the Lord that he may cleanse our mouths, which are disfigured with human foulness.4

The Joy of the Saints

Our lips have been cleansed, let us sing with joy before the angels.  St. Augustin says,

St. Augustin at this point relates the story of St. Crispina a martyr of the fourth century.

Our joy and our song are not affected by what others do.  Our enemies can merely rage against us they can do nothing more.  They can take our money, strip, denounce us, banish us, afflict us with grief and tortures, at last if they be allowed, even kill us, but what else can they do?  We are part of a church here on earth and we are joining the church above in our death.  The saints who have gone before are all around us, the world can do nothing permanent against us.  The Lord will take vengeance on those who rage against and we will dwell in peace forever with him.

The Resurrection of the Body

This now brings us to the Epistle reading.  This morning we begin a look at the importance of the resurrection which will continue over the next three weeks.  Death means nothing to us because there is a resurrection.  If we stray from believing in the resurrection of the dead, we will lose everything that we have believed.  As another Father put it,

The resurrection of the body is the whole point of our gospel message.  Without it, all the works of prayer and fasting which we do are meaningless.6

We have Great Lent coming up very shortly as our Metropolitan told us in his Shepherds Letter today.  There is also the Nineveh Fast that you can take part in this week.  These fasts, however, are meaningless, if we do not believe in the resurrection of the dead.  We have no hope beyond the grave without the resurrection.

Christ Died for Our Sins

St. Paul does a great job here of summing up the Gospel message.  We’ll just go over a few of the things that the Fathers see as key in this brief summary.  First Christ died for our sins.  This means that our sins were not as great as the justice of the one who died for us.  It also means that if he died for our sins then he must have been sinless and did not die the death of sin but the death of his body.  We die because we have sin and therefore it does no one any good.  Christ died without sin thus destroying death and sin.

Second, that Christ rose again.  He died a genuine death and therefore needed a genuine resurrection.  In all of this St. Paul points us to the Scriptures for the proof.  Some of the Fathers have listed some of these Scriptures if you’d like to search it out on your own.  St. Hilary of Poitiers points out to us,

Paul reminded us that we are to confess the manner of the death and resurrection…strictly according to the testimony of the Scriptures, so that our understanding of his death might be in accord with the apostles…7

As I mentioned, at the beginning of our blog, we have three statements of humility, we now see the third.  St. Paul declares himself the least of the apostles.  St. Chrysostom tells us,

Paul says this because he was a humble man and because it was what he really thought about himself.  He was forgiven for having persecuted the church, but it was a shame he never forgot.  It taught him the greatness of God’s grace toward him.8

It urged him on to toil ever so much harder for the Lord and probably in a large part the reason that we are here today.  St. Paul laboured to open the gospel up to us Gentiles.  We are for the most part the descendants of his ministry.  He preached, and we believed. The second boat received the gospel through his ministry.

For us then today, let us seek the Lord in humility. We ought to make the sign of the cross over ourselves and ask for his cleansing for our mouths and our lives.  We too can boldly proclaim his message, by the power of the Holy Spirit that he has given us.  Let us look to the forgiveness that St. Paul received, and know that for whatever we have done there is forgiveness also.  We have this hope that when we are persecuted or abused, persecution cannot touch us past the grave.  Let us rejoice that there is a resurrection and that we will stand before the Lord with St. Paul, St. Peter, Isaiah and all the saints.

Basaiti, Marco, approximately 1478-1530. Call of the Sons of Zebedee, from Art in the Christian Tradition, a project of the Vanderbilt Divinity Library, Nashville, TN. http://diglib.library.vanderbilt.edu/act-imagelink.pl?RC=56395 [retrieved May 10, 2019]. Original source: https://commons.wikimedia.org/wiki/File:Basaiti_Call_of_the_Sons_of_Zebedee.jpg.