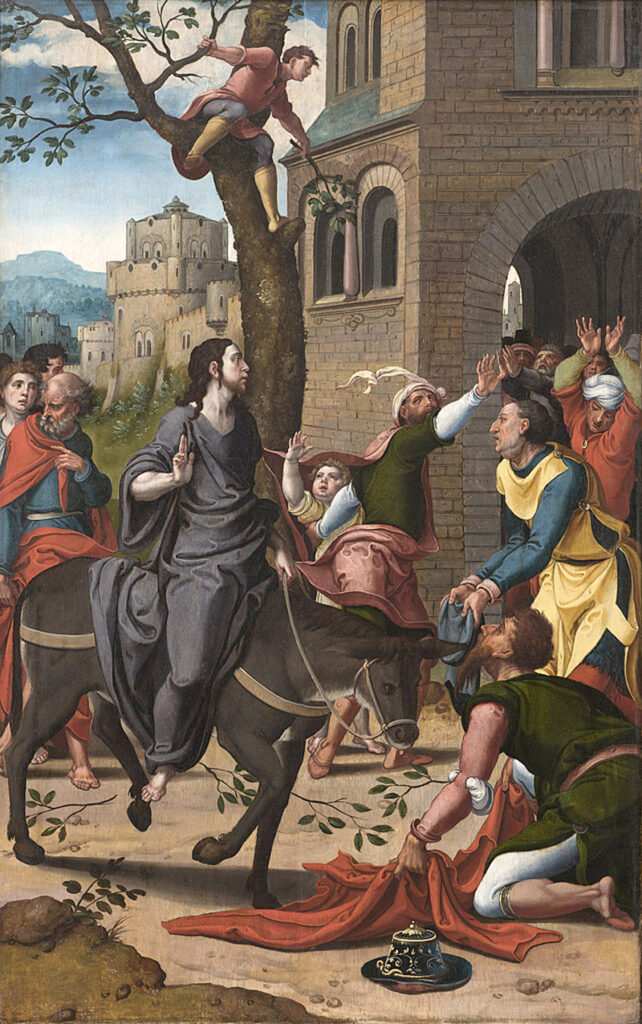 Today, we draw to the beginning of the close of our Saviour’s life – His triumphal entry.  A triumph that was still not completed and yet at the same time one that had been completed before the foundation of the world.  Among our Orthodox brothers and sisters this Sunday is regarded as the equivalent of the western Christ the King Sunday in November1.

What is his triumph?

In both our Gospel Reading and the Psalm reading the Fathers see the inclusion of the Gentiles into salvation.  It was now time for Christ to begin the journey to His Passion for the salvation of the whole world.  “He therefore goes up to Jerusalem to free the inhabitants of the earth from the tyranny of the enemy, to abolish death, and to destroy the sin of the world.”2

Let us take a look at some of the pictures that the Fathers see in these passages of salvation for everyone.  First, two disciples were sent.  This speaks of both the apostles and the prophets.  Salvation wasn’t opened up to us Gentiles until after the apostles came.  Once both had come we were brought in and are now subject to Christ.

Second, quoting the First Testament St. Ambrose tells us that Jesus was on the Mount of Olives planting new olive trees i.e. adding in a people to salvation that were previously excluded.  He continues saying,

He is both the means and the goal.  He is the one who enables us to come to him.  Formerly all the regulations of the old covenant were required, but now new olive trees have been planted and the Gentiles are welcomed in.

Third, just as when the two disciples were sent to unloose the colt were not to use their own words, so also the Apostles and even us today are not to use our own words when proclaiming the Gospel.  The colt was tied.  The Jews were bound under instruction of the Law and the Gentiles in their sins, but now through the word of Christ, liberty is offered to all.  St. Cyril tells us that the apostles went out neither with their own words or in their own name, but in Christ’s and as a result,

they implanted the faith among the Gentile nations; and by the command of God the hostile powers ceased, which claimed to themselves the obedience of the Gentiles.4

The church is here today and thriving, not because of our own clever words, but because of the words of Christ and the power of His name.  Glory be to God!

Fourth, Christ comes with the apostles both laying their garments before him and praising him.  Of the first, we can see a picture of the virtues of the Apostles.  St. Ambrose tells us that, often in Scripture, garments are virtues.  In this way the virtues that the Apostles had were laid before softening the hearts of the Gentiles before they proclaimed Christ by their words.  In the same way the virtues that we have can be displayed for our friends and neighbours before we proclaim Christ to them.

Of the second, of praising him, the disciples praised him for all the wonderful works that he had done and his glory and of his sovereignty.  This is an example for us.  We should always praise and glorify God for all that he has done in our lives.  We must also praise Him for who He is and how great He is.

Fifth, the whole multitude began praising him.  The Pharisees took issue with their praises and Jesus said that the stones would cry out if the people remained silent.  The Fathers tell us that while this would be a great miracle, if the rocks literally began praising the Lord.  However, they see this speaking of a different miracle.  Israel refused to acknowledge Christ as their king and by the end of the week their praises would cease and turn to hatred.  However, God raised up to praise him the stony hearts of the Gentiles.  Those who were long bound in sin are now praising God.  The message first proclaimed by the Apostles and now by those who have been sent by the Church, has brought forth fruit in the praises of the nations.

In our Psalm reading, we have a phrase that the Fathers were quite excited about.

The stone which the builders refused is become the head stone of the corner.

This fits alongside of our theme that the Gospel has come to the Gentiles as well.  One Father stated that this stone has been set over the building which is the Gentiles.  St. Augustin states in a couple of different sermons that the cornerstone speaks of joining two things or in our case two peoples together.  For example,

The church of the Jews comes from the circumcision; the church of the Gentiles from the uncircumcision.  Coming from different directions they are joined together in the Lord.  That is why the Lord is called the cornerstone…. Where there is a corner two walls connect; two walls do not meet in a corner unless they come from different directions; if they only come from one direction, they do not make a corner.5

We see then that in Christ the Church has joined two peoples together.  The one grew up under the understanding of who God is and what his ways are and the other in ignorance.  But now they are one body Christ being the peace that has made both groups into one.  Let us praise Him and proclaim with the multitudes, “Blessed is the King.”

Therefore, we ought to praise God for His goodness in extending his salvation to us the Gentiles.  Let us praise God that Christ is both our salvation and the means to be saved.  After receiving this salvation, we must proclaim it, not in our words but in the words that Christ will give us.  Let us remember to look to developing the virtues in our lives so that our conduct will soften the hearts of the ungodly, before we speak a word.  Finally, let us rejoice that the Church is one body in the Lord!