We are now in the fifth week of Epiphany and are quickly approaching Lent in about two weeks.  I would encourage you to read through Metropolitan’s booklet on Lent in preparation.  I would also encourage you to download his fifty-day devotional through Lent A Journey with Jesus to the Cross.  It begins on Transfiguration Sunday.

The Salt of the Earth

In the Gospel passage, Christ calls us to be the salt of the earth.  To understand what this means for us the Fathers have given brief descriptions of what salt does.  In previous centuries, before we could freeze meat it was one of the few ways that meat could be preserved for any length of time.  It is still used to some extent.

The other use, which we very much still use is to bring out flavour in the food we eat.  One of the fathers describe it as finding hidden flavour.  Cyril of Alexandria says that bread and fish aren’t even edible without salt.

Believers As a Preservative

First, we are a preservative.  As salt keeps meat from the stench of decay and being eaten by worms, so we stand in the gap against the sins idolatry and fornication preventing their stench and decay to destroy this world.  We do this first through our way of life.  Showing by our example what righteousness is and second through our prayers and intercessions for those who are caught in the evil way. We are to be what holds together this world from the onslaught of the evil one and his forces.

The Seasoning of the Apostles Teaching

Believers Salt for Others

Finally, we are salt not of ourselves but of the earth, of the entire world.  The whole world has fallen into evil and are in bondage and decay.  God has sent first the apostles, then the believers through the ages and finally us today to be accountable for the world.  He requires from us the character traits that are necessary and useful not for the benefit of us but for the benefit of others.  The way that we conduct ourselves is to be for the benefit of those around us and not for ourselves primarily.  We need to be sharing the love of Christ with those around us through both words and actions.

The Light of the World

Second, he tells us that we are the light of the world and a city on a hill or mountain.  He and us together have become the city that is on the hill.  He assumed our flesh so that He could achieve union with the rest of mankind.  We through our union with Him become the community of the city.  We are upheld by His lofty height so that the world can see the good works that he does through us. 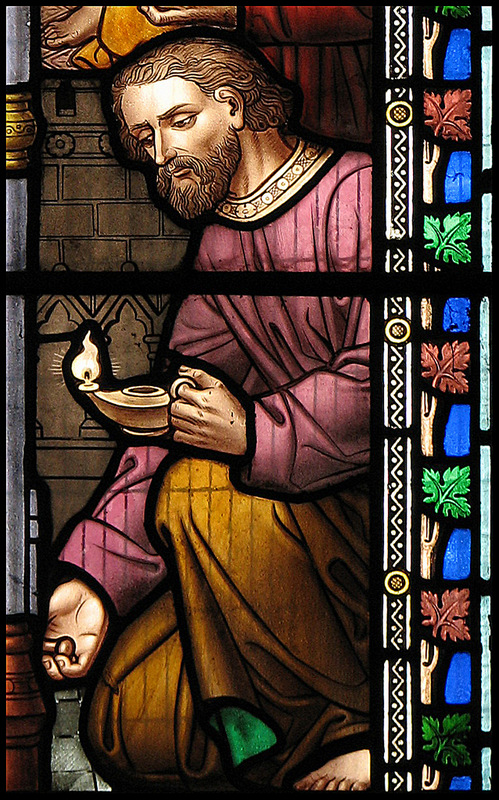 Through us, he chooses to pour out the light of His knowledge on the whole world.  We are his instruments both declaring with our mouths and practising with our conduct that the good news of Christ has come to the world.  We must always remember that these two – practice and teaching – must never be separated.

The passage takes a turn as far as subject matter but is still very closely related, Christ is changing to talk about the law, but it is still very much emphasizing that teaching and action must be related.  The righteousness of the Scribes and the Pharisees was one of appearance and not reality.  If you go through the rest of St. Matthew five, you will see the appearance of righteousness and obedience to the law compared to actually doing the works of heavenly righteousness and the merits of faith.

By the words not the smallest letter or part of a letter, the Fathers understand this as speaking figuratively that even the smallest things in the law point to the future of the heavenly kingdom.

We must be very careful to understand that in the “You have heard…but I say to you” we do not think that the law is being abolished.  He is rather enhancing it so that it can be perfectly fulfilled.  We are now to teach and live the law of God through love.  He is showing us practical ways to fulfill the law.

In our 1st testament reading we see what the righteousness of the scribes and Pharisees looks like.  To warn them of their plight, God instructs those at that time, through his prophet Isaiah, to lift up their voice like a trumpet.  We also need to warn those who are confident in their self-righteousness.  Our voice like a trumpet is not to be melodious but rather the sound of an alarm.  Its very noise is to be a warning.

What exactly were they doing wrong?  They were fasting which is usually commendable.  However, it is of no use to endure an empty stomach (and by the fourth or fifth week of Lent it is definitely endurance) but not turn away from things that are displeasing to the Lord.

They were fasting to fulfill their own evil intentions.  Saint Ephrem the Syrian explains an example of this would be to fast so that misfortunes would come upon your enemies.  One of the fathers also point out that they were turning fasting on its head.  They were fasting so that God would draw near to them rather than in repentance drawing near to him.  They wanted his blessing and protection without changing their hearts and lives.

St. Jerome also shows us a spiritual application.  If we see people freezing outside the church in cold unbelief, we are to lead them into the church where they can be clothed with incorruption.  They can be wrapped in the mantle of Christ so that they will not remain in the grave.

Some of us physically cannot fast and some of us spiritually should not.  The fathers very seriously warn that if fasting brings out anger and irritation against one another so that instead putting aside the passions they are rather increased.  It would be better to eat moderately with thanksgiving.  Therefore, let each one of us, who are physically able, seek the Lord for the strength to overcome the passions through fasting, rather than being overcome further into them by hunger.

In verse eight we see something very reminiscent of our gospel passage.  When we do these good works, light will break forth and we can be sure that the works of God will follow.  We are the avenue that he has chosen to use to reach the world.  We are his vessels.

The Righteous are Generous

In the second part of the Psalm reading we see again this instruction towards giving.  It is a characteristic of the righteous that they are generous to the poor.  St. Clement of Alexandria tells us that it isn’t when we possess and keep our riches that we are wealthy, but when we give it away.  Generosity comes from the soul and so true riches are found in the soul.  Riches are not for us to keep.  If we don’t have them, we must not seek them by suspect or evil means or dishonest schemes.  However, if we do have them, let us pass them on to heaven through our good works.

As we look at our epistle reading, we see that St. Paul is one who obeys and teaches the commandments of God and his Gospel.  He preaches the mystery or the testimony of God which is God the Son who had been hidden for all ages but has now been revealed in the incarnation.

This preaching of Christ has come with a cost though and he provoked hatred and persecution against himself through that.  In II Corinthians we see a partial list of what he suffered during his lifetime and in the book Tried by Fire we read that he paid the ultimate price with a martyr’s crown.

What he says about this, here in this passage is very encouraging.  He came in weakness, fear, and much trembling.  I somehow just think he went from place to preaching the Gospel and think that persecution to him was like water rolling off a duck’s back.  No, he was completely human.  He was scared and had fear.

St. John Chrysostom says, this credits his determination or maybe more in our language, he was sure of his calling.  He had this fear, but he did nothing wrong because of it, but he just kept on in the way that God had called him despite being afraid of death and beatings.  Continuing to preach and as I just mentioned he ultimately laid down his life for the calling which God had laid upon him.

He speaks wisdom to the mature.  Who are the mature?  They are those who know that actions are louder than words.  Our faith does not rest upon mere words, but on the living out of the teaching of Christ.  We receive the ability to live out this teaching through the grace that is given to us.  Grace is received through the sacraments.  We receive it through the Eucharist.  Grace is the Holy Spirit enabling us to live the life entrusted to us.

Light for Others, from Art in the Christian Tradition, a project of the Vanderbilt Divinity Library, Nashville, TN. http://diglib.library.vanderbilt.edu/act-imagelink.pl?RC=55830 [retrieved May 5, 2020]. Original source: http://www.flickr.com/photos/paullew/5421034602.